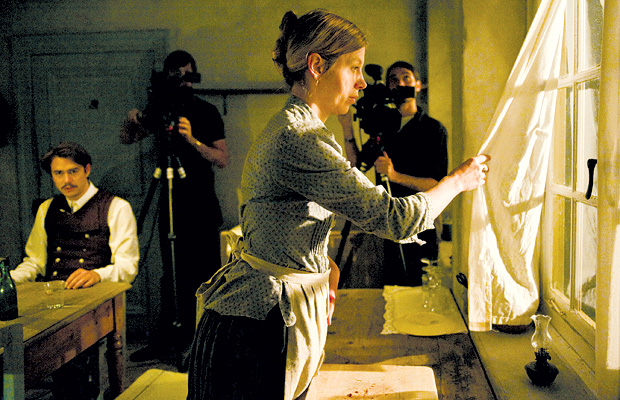 Since her pioneering work with the company Classics On A Shoestring in the 1990s, Katie Mitchell’s intense, uncompromising directorial style has made her both loved and loathed in the British theatre world.

Her work ranges from multimedia performances and sound compositions to mainstream theatre; she recently made a splash on the continent when her video-laden Wunschkonzert for the Schauspiel Köln was invited to participate in the 2009 Theatertreffen.

Now, Mitchell is staging a German-language version of August Strindberg’s Miss Julie with simultaneous live filming to create a fresh, cinematic perspective on the classic drama. EXBERLINER caught up with the director during the last weeks of rehearsal before her Schaubühne debut.

How did your collaboration with Berlin’s Schaubühne come about?

When Wunschkonzert came to the Theatertreffen, they became interested in the show and asked if video designer Leo Warner and I would want to use the same techniques more radically by taking a very well-known old play…

So it was their idea to use the Strindberg?

Where does the rest of the text come from?

There’s some poetry by Inger Christensen, who is a contemporary Danish poet. I love the idea of putting Strindberg, the great misogynist, together with feminist poetry.

How different is your Miss Julie ‘remix’ to the original play?

The basic idea is that when you watch Miss Julie normally, in a normal production, or even in an abnormal production, you’re always looking at it in a wide shot, in film terms. But cinematic subjectivity is not really possible in theatre, so here we’ve taken one character, the least significant character – the maid, Christine – and we’re telling the story through her eyes. Which means that, when she falls asleep, the action of the play stops and we go into her dreams…

We’re doing the play from the point of view of the least important character and, you know, it’s very moving to watch the main action through the eyes of a person who is actually going to be really, profoundly affected by the action, but who the two protagonists don’t really care about. It’s like us in life, really. These grand dramas play out, but there’s a lot of collateral damage. There’s amazing damage to this woman’s life: this was the man she loved, her fiancé, the man she was going to spend the rest of her life with, and in one evening all that is irrevocably destroyed. And she just watches the dismantling of her entire future, second by second, while these careless people don’t even think about her.

How did the process begin: film or text first?

We did three weeks of development in London – we did a storyboard of about 500 shots – and then we came here and worked through the storyboard, and figured out how to connect all the shots with the German actors. Of course, we’ve made huge modifications in response to what they’re offering.

They say they do a lot of shouting normally, and what they mean by that is a tendency towards a more expressionistic form of representing behaviour or emotion. Here, we’re looking at something very discreet, quiet: something that’s mainly to do with looks, rather than words – it’s pure film acting. I’m very influenced by Scandinavian film directors like Ingmar Bergman, or the Austrian Michael Haneke. Haneke’s work was a big influence on the way in which our film was shot, specifically because he does quite a lot of very posed shots with static frames – there’s very little movement – and that’s what we can do fairly easily.

So the production’s development has been driven by the filming?

It was totally led by the film output. You can watch the scenes played in the kitchen, live, but you can also watch the film. You get the normal theatrical reality: there is the Swedish kitchen, they’re all in period costumes, they’re all acting out the scene. But the film shows the point of view of the person falling asleep in the corner [laughs], so it’s all very interesting…

If you’re into film, you’re really going to love it. And if you like the play, it will challenge your understanding of what a play is!

How has your idea of what a play can or should be changed over the course of your career?

For me, at the heart of everything is an attempt, maybe a pretty foolhardy attempt, to capture and crystallize how we experience ourselves in our environment – the very fragile, tiny, delicate strands of our perceptions – and to try to do that very accurately, so that it’s very respectful to life. Film enables you to do that so delicately and precisely: you see those little movements of your little finger.

So what was it like working as a director here, as opposed to in the UK?

When I went to Salzburg for the first time, I was sitting in the square and there were three banners with three middleaged men’s faces on them advertising three shows. I asked, “Are those pictures of the playwrights?” No. “Are those pictures of the leading actors?” No. “Who are they of, then?” The directors. And I thought, this would be impossible in the UK: the directors’ faces on their shows? That would be a travesty.

Is there any project that you’ve desperately wanted to try and haven’t done yet?