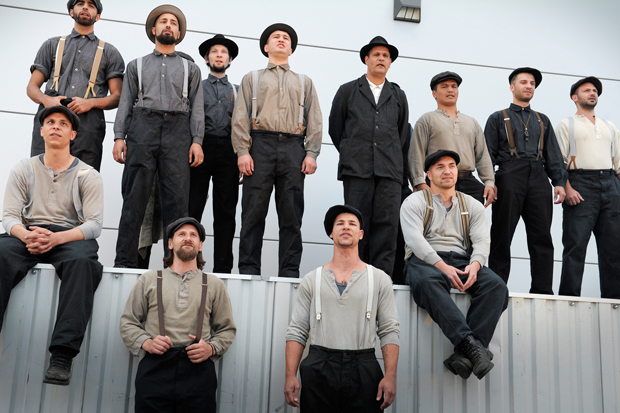 Producing a play within a three-month period is never an easy feat. But what happens when you throw a cast of rookie, potentially volatile prison inmates into the mix? That’s what AufBruch, an organisation that stages theatre with current and former prison inmates, has been exploring for almost 20 years. Almost finished with a two week run of Nigel Williams’ Klassenfeind at the Jugendstrafanstalt Berlin, dramaturg Anna Galt talks us through the benefits and challenges posed by staging contemporary theatre in jail.

How did AufBruch get started?

There is a tradition of working with people who are marginalised by society in theatre, and actually prison theatre is pretty well established all over Europe. AufBruch was started in 1997 by Holger Syrbe and Roland Brus, who had previously been making theatre with homeless people. They started on a pretty small scale, where they themselves played some of the roles, in Tegel prison. Now we produce five shows a year – at the Tegel, Charlottenburg and Heidering detention centres, one in juvenile prison and one outside production involving ex-prisoners.

What kind of things do you usually focus on?

The tagline of our group is AufBruch: Kunst Gefangnis Stadt, which means “prison art city”. That’s important to us, because one of our aims is to open up the prison to the public. I mean, who normally goes to visit the prison? The average person just doesn’t. But it’s a very important aspect of our society to understand what we do with the people who have so many problems that they can’t be integrated, or have done terrible things. So the public comes in and experiences the prison for the first time, and we always have an hour of discussion afterwards and the audience gets the opportunity to speak to the prisoners. The flipside is when we do the show outside: we bring the prisoners out into the world. It’s a temporary suspension of the prison walls.

What is the theme of the new show?

Klassenfeind is a classic piece of British social realism from the 1970s. It’s about a group of young men who are the worst in their school, who have been abandoned by the teachers. No one will teach them anymore. They’re waiting for a teacher to turn up and then they decide at some point to teach themselves, and each takes a turn to give a little lesson on anything, from building flower boxes to sex to making bread and butter pudding. We tend to try and stage plays that have some relevance to the themes and issues of being in prison, in a confined all-male environment or being marginalised by society.

Are casts comprised purely of prisoners?

Our outside-the-prison productions utilise both ex-prisoners and professional actors. That’s the only place where we mix the two. There was one show in JVA Charlottenburg where they used an actor from outside, but it tends to not really work because you get this very authentic quality out of the prisoners, precisely because they’re not professionals. They can just be authentic on the stage, which is very hard for a trained actor to do. If you bring in a trained actor and put them alongside that, you get this strange juxtaposition of perfect artifice and imperfect authenticity.

How do you get prisoners on board?

It depends on the setting. In Tegel prison we just walk around, while in the juvenile prison we actually go and present ourselves. We tell them about the project, then they have the opportunity to sign up. Then we host a kind of initial trial weekend, which is a little about the casting but it’s also for the prisoners, because a lot of them have never experienced theatre before. Usually on those weekends we get quite a big turnout, maybe 40 people. In principle we take everyone who wants to take part, but usually the number reduces itself naturally. We lose a couple along the way because it’s a lot of work – we rehearse five days a week at the men’s prison, four days at juvenile, from 4pm to 9pm. And of course some prisoners end up getting disciplined, so are unable to attend.

What do you do when that happens?

It usually involves a last-minute recasting or restructuring the play! That’s why we rarely cast main roles. If there is a main role we tend to split the character into two or three characters if that’s possible, or give some of the text away so that it’s more even and we’re not entirely dependent on one or two people, because losing them right before the show is always a big risk for us. And that has happened. We have lost a main role – we literally restructured the play within an hour. We were in Tegel and we had a public show the next day, and our lead left the production. We had one guy who had joined the group late, and he therefore had very little text but he was luckily very bright, and he took most of the text. Then we divvied up the rest, and they went back to their cells and learnt their new lines. The next day we did the show after a couple of run-throughs, and it worked!

It sounds like the prisoners get very passionate about it.

Those who stay are bitten by the bug, and once that happens they actually develop artistic ambitions. They know that if anything happens to the group it puts the entire production at risk. Even in juvenile last year they were demanding to do a second run-through, which had never, ever happened before! It kind of suspends the normal power structures that would exist in prison, because it has to be ignored and everyone has to work together. They become invested in it, and the art becomes greater than the individual. The experience of making art is a powerful one in the sense that it gives them a sense of meaning that is beyond just working or solving their problems.

Are there ever conflicts between prisoners during rehearsals?

If there are conflicts it tends to be early on, then at some point the group stabilises. There’s usually some kind of troublemaker, there’s usually a couple alphas and a couple weaker ones, but once it stabilises it tends to be quite solid. It also helps that we don’t discuss their crimes or much of their personal history. Our policy is to not want to know what they’ve done, we don’t get files on them or anything. You can probably guess that if someone has been in prison for 20 years that he probably didn’t just steal a chocolate bar, but officially we don’t know and that creates this space that is somehow neutral in the prison. They’re used to being defined by their crime, their ethnicity, the group that they belong to, and doing a lot of therapy and talking to social workers, constantly dealing with themselves, and the theatre offers this space where they’re not “so and so the murderer” or whatever. They can leave that behind.