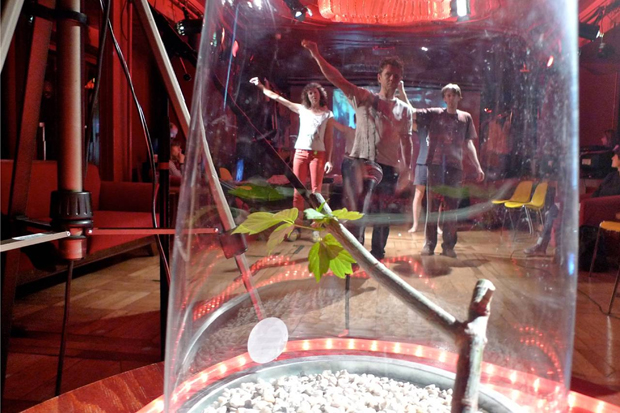 An improv dance extravaganza, a series of confessionals, and an homage to a praying mantis, Gob Squad’s Dancing About is a dance roulette: five Gob Squad members perform a simple, repetitive dance together, while individual members step forward to make confessions to the audience, and to the praying mantis they’ve brought on stage as a symbol of their unity with nature. “I was bullied in school,” “I would kill my uncle if I could.” If the other members don’t identify with the confession, they stop dancing, leaving the confessor to share his or her story alone. When the story’s done, the dance begins anew.

It isn’t easy to tell which parts of Dancing About are improvised and which are fully scripted, but the structure of the show makes the storytelling more than intermittently reluctant.  The evening I saw the show, one performer confessed his frequent visits to the gym, and seemed surprised when all the other dancers walked off stage, leaving him to fill out his bodybuilding backstory, which wasn’t dull but wasn’t quite the stuff of Shakespeare either.

Part of the point of Dancing About seems to be that sharing our humanity is fruitful, even when we don’t have a thrilling tale to tell. But hearing nearly two hours of motley stories that people seem ill-at-ease recounting, rather than set aflame to share, makes for uncomfortable rather than illuminating viewing.

This being Gob Squad, there are plenty of engaging moments. Each act ends with one actor lying on the floor, filling out the details of their confessions as their fellow members place evocative props like foam fingers and plastic lobsters around them to help them tell their tale. Filmed from above, and projected on the stage’s back wall, these moments elevate the material from cleverness to something dream-like and surreal. And the piece’s opening, where the group enters dressed as insects and gyrates to the Chromatics’ “Tick of the Clock”, proves a mysterious way to show off the cast’s unpolished but weirdly transfixing dance skills.

But the dancing gets less disciplined, and a bit less interesting, as the show proceeds. Throughout Dancing About, the group gestures towards Big Questions – grandiosely declaring ‘I am human!’  as they remove their insectoid masks, for example. But it’s never clear whether they’re parodying their concept, or mean us to take them seriously.

When all’s said and done, Dancing About is a night of personal sharing and cutting loose on the dance floor. That’s great, of course, but you can see something pretty similar at any number of Berlin clubs, and there you could join in.