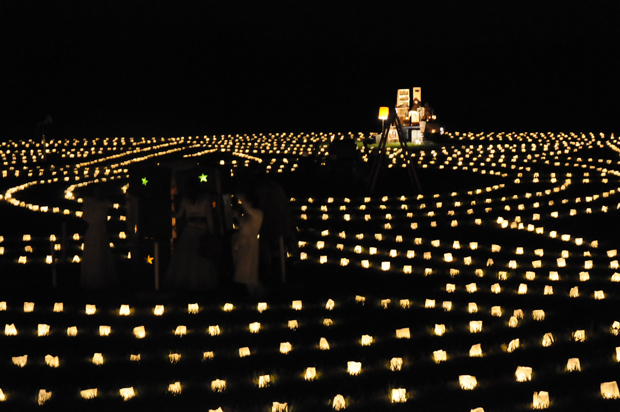 Do not answer a fool according to his folly, but enter his booth and embark on a great journey. Standing in a crowd, taunted by the fool, peeved that your ticket was for a quarter past and you’re still waiting at a quarter till, it would be easy to retreat from what appears to be a circus-themed candlelight vigil.

But persist: push through the crowd, under the fool’s legs and into the booth to a transcendental labyrinth of narratives and light.

Theater Anu’s Die große Reise is indeed an adventure. Thousands of candles, hundreds of suitcases and a handful of actors fill Tempelhofer Feld, with winding paths leading you from scene to scene. In a cul-de-sac, it’s up to you: do you maintain the illusion of the maze, or do you cheat it and hop the candles?

The characters likewise explore their own labyrinths, meet dead ends and begin again. A prince, literally bound to his lineage – this becomes clear as we learn the contents of his suitcase – finds the weight of power unnerving and attempts to flee. A woman with a feather fetish – she rubs them all over her face and body – dreams of flying but finds her efforts in vain. Each character has a fantasy it seems they’ll never achieve. Their delights and sorrows are brief and naive but committed. (And easily comprehensible to German and non-German speakers alike.)

It’s somber. The occasional music, hush of the wind and Tempelhofer Feld’s eerie nighttime atmosphere keep everything a bit uneasy. Shadowy voyeurs ­– too cheap to buy tickets – watch from beyond the labyrinth and make you a part of the show. Yet the myriad rows of candlelight keep the stage secure and provide a sense of connection. Gaze across and see the lamp lady twirl her raggedy doll in ways that would dislocate a real child’s shoulders. Turn your eyes to center stage as a young couple snaps selfies atop a rickety ladder. Only one performer is physically removed from the rest: a naked woman painting eggs within a fortress of suitcases. Despite her nudity, this scene is the least revealing. Due to her isolation, it’s also the most unsettling.

It may take longer than expected to enter the fool’s booth. Fellow visitors may saunter at a geriatric pace. A dead end may tempt you to cheat the maze. Die große Reise is a test of patience, but ultimately an invitation to test the depth and flex of your imagination.