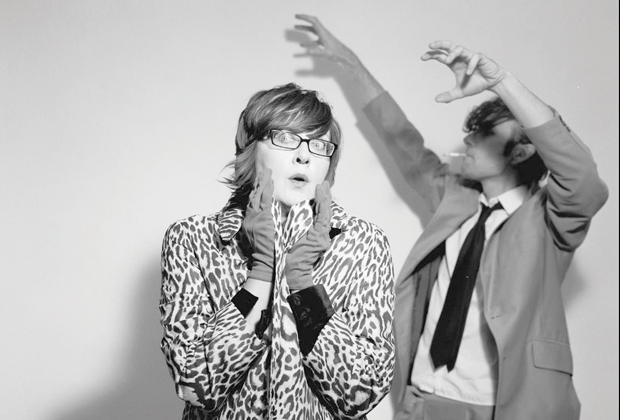 Stereo Total, Berlin’s cultishly eclectic electro-pop duo, is putting their touring schedule on ice to take to the HAU stage for two very special nights: a journey into the inferno of rock’n’roll and its most damned and beautiful stars. We talked to the duo’s fairer half, Berlin’s quirkiest Frenchie, Françoise Cactus.

In der Hölle des Rock‘N’Roll has been tagged a ‘music comedy’. What does that mean?

It’s a musical like Cabaret or Dirty Dancing or the old Fred Astaire-Judy Garland stuff. When I was a little girl I loved what they called comédie musicale américaine. I am a huge fan of Jacques Demy. He filmed the best musicals ever!

Concert or theatre? How much music should we expect?

It’s a mixture between theatre and music. Actually, most people in the play are musicians. There are 20 people, 10 women, 10 men. They play well-known dead rock stars. We have only a few rehearsals, and everybody is on stage all the time, so there will be some chaos, which is perfect to represent the hell of rock‘n’roll.

It is a piece about rock‘n’roll stars who met early, unnatural deaths: Is rock‘n’roll dangerous for one’s health?

How do you intend to die?

I suppose I’m going to slip on a piece of soap in the bathroom. Unless I get struck by cancer like everybody else.

Is it a tradition for Berlin-made stars to have their own HAU vanity shows? Are you ‘doing yourself’ – the Peaches thing?

Actually I was not in town when Peaches did her show. I heard it was really good. We have a tradition in Stereo Total where we sometimes do musicals that we write ourselves and invite our friends to perform with us. We already did a Christiane F. show, a Godard-weekend show, a Jacques Tati show and a Patty Hearst show.

Your previous forays into the theatre were at Volksbühne. Why HAU?

Most of the shows took place at the Volksbühne, but the organiser of those shows moved to HAU, so we asked to play there. And also because the Rococo style of the HAU 1 theatre fits better with our play.

Ever dreamt of being an actress?

When I was young and beautiful, I acted in several movies, which were not the best in the world! Haha! Now I’m more interested in being a director. Even if it’s a huge stress, I love making a special project with special people. It’s like in a hippie community!

Why should people go see the show?

Because they will see the most beautiful faces in Berlin, because the play is funny, because it’s unconventional theatre, and because the music is great!