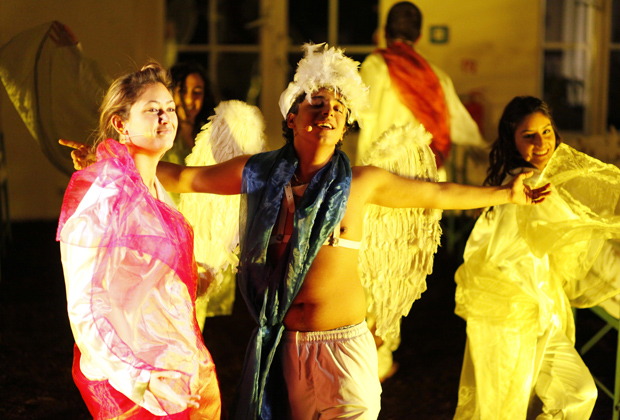 “Who’s a victim? I’m just a victim of society. You can’t do anything about that.”

If it were said with anything other than a twinkle and a healthy sense of irony, it would be trite, but the young Turkish performers bring a charm and an energy to Ferienlager – Die 3. Generation that helps you forgive its shortcomings.

Returning to Berlin after playing in Munich, Hamburg and New York, Ferianlager is a peek into the dreams and dilemmas of ten third generation Turkish teenagers (or should that be German teenagers of Turkish descent?). A couple of slumdog angels introduce us to a colourful cast, among them a budding alpha-male with slick dance moves and a motormouth nerd going through occupational therapy.

It’s punctuated with fun, theatrical interludes – a cow passing in the background, the boys going for an impromptu smoko (and getting locked out by the girls), and a Turkish dance number that had the audience cheering – which often capture the social nuances better than the slightly forced arguments about headscarves or whether Turks should date Germans.

The notion of being both a stranger and feeling at home in an adopted land resonated well with the mixed audience of Turks, foreigners, expats and locals.

Adopting a tone of youthful innocence, Ferienlager deals with so many thorny issues surrounding integration, that it can’t help but just skim the surface. It’s at its best when it doesn’t take itself too seriously. As one angel chastises the other, “Theater, Mann! Theater! Bühne!”