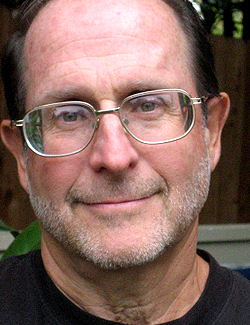 Rich Rubin is one of five finalists in the English Theatre Berlin’s inaugural 10-minute-play competition, in which writers submitted works on the theme “English in German daily life”; Rubin’s contribution, Hooray For Hollywood, details a coffeehouse encounter full of charming, quick-witted cinephile banter.

Rubin, currently a resident of Portland, Oregon, lived in West Berlin for several years in the 1970s. His play will be staged with the other four finalists’ on June 15-19. Tobias Jochum met him.

Can you tell us about your time in Berlin?

I was stationed in Dahlem as a GI from 1972 to 1976. I came to the city with my wife and our first child, and we had two more kids while we were there. I actually have a very nice connection with the city and still have vivid memories. I would love to go back some day.

You could say I am a novice playwright in an old person’s body. I loved writing back in college, but then I went on to become a doctor and gave it up. In the 1990s, I wrote a few screenplays; none of them were ever turned into movies, but I did have some success in competitions. Since my retirement, I have really started to write more. I have had a long play staged in Albuquerque, New Mexico last year, but mostly I do shorts. I have done about 20 of them over the past three years.

How do you feel about the 10-minute-play format?

It started about 10 to 15 years ago, but has become more popular recently. It’s something I especially enjoy. I think it works best when the play is funny and snappy. The plays are usually staged in groups, which works out well for the audience because of the variety, and the theaters as well, because of the low production costs. And it is also a great opportunity for up-andcoming writers.

Yes, there are parallels. Both forms are more inclusive and democratic. But at poetry slams, writers always perform their own material, and with these short plays that’s obviously not the case. It’s magic what actors can do with the written word – even when it seems a bit flat on the page.

In your play, a German guy has learned English solely from American films: every line he utters is from a famous movie. Was it difficult to make the dialogue sound natural?

Well, finding the quotes was easy – there are so many ‘best movie quotes’ online. Constructing everything else around it was the tough part. I’m afraid that it may sound a little bit forced at times… but I really trust the actors. I envision Hooray For Hollywood played with a broad comic approach, and flamboyance. I hope the audience will get a laugh out of it!