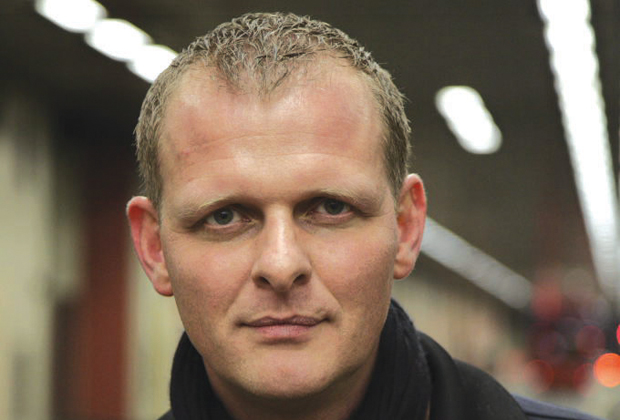 The stage has been transformed into a muddy graveyard and the actors pass around video cameras to project intimate close-ups on the backdrops. That’s Shakespeare as seen through the eyes of Schaubühne artistic director Thomas Ostermeier. Since it first premiered in 2008, this gritty, interactive version of Hamlet has played to sold out crowds around the world, from Korea to Australia.

EXBERLINER caught up with the jet-setting director to ask him about his take on the classic after he returned from London, where he participated in the Globe Theater/Goethe Institute-sponsored festival Shakespeare in German.

Easy. He’s the best writer. He’s the most challenging writer to every director and, to be honest, I got a little bored by other plays because they’re not that complex, they’re not that difficult concerning the different layers of possibilities of interpretation.

How do you go about this interpretation?

All I’m doing when I put something on stage is really trying to be truthful to my experience and my view of the world, and to find connections to the play. If you only put the text on stage, it’s not theatre. You have to feel the urge of the director and the ensemble to tell something, probably something which should be painful and desperate and about the tragic sides of life and the horror and the pain, so you should feel this. That’s a part of art that should be in a performance. If not, it’s dour and it’s vain and it’s what we tend to see in 80 percent of what we see on stage.

One actress plays both Ophelia, Hamlet’s love interest, and Gertrude, his mother. What were your reasons for this casting choice?

I think what happens, what Hamlet’s mistake is, is that he doesn’t see the difference between Ophelia and his mother. When we are here on earth, the first very important connection that we have is the connection to our mother. We need to trust in her or we cannot develop as human beings, and when this trust is taken away, we tend to be very much in danger. This is what happened with Hamlet. He cannot trust anybody anymore, especially – and this is his mistake – he cannot trust any woman any more. For what his mother did, he punishes Ophelia. This is something that a lot of men do – they mistake the woman they love for their mother.

This production is truly comedic at times, despite the fact that Hamlet has been considered one of the greatest tragedies of the English stage.

Sure, but at the same time, Shakespeare was a great writer of comic relief. And Hamlet is written in the tradition of the Elizabethan theatre. There was a comical character that was allowed at the time to attack the king, or to tease the king. That’s what Hamlet is doing – he’s hiding behind the mask of the mad man and he’s saying very rude things to his stepfather.

How has the production changed since it first came into the repertoire in 2008?

Some things are changing in a direction where I don’t agree, because Lars [Eidinger] is taking over not only so much responsibility for the character, but also for the show. He’s driven by this idea – which I share, but sometimes has strange results – that he has to be so sensitive to everything that goes on around him during a performance, that he immediately has to interact with whatever happens, so he interacts a lot with the audience.

But I also keep on working a lot on scenes, so every time we go somewhere, every time we rehearse, we try to constantly build on what’s there. It’s a very different performance now, especially concerning the play of the actors: it’s stronger, it’s selbsverständlicher, it’s juicier.