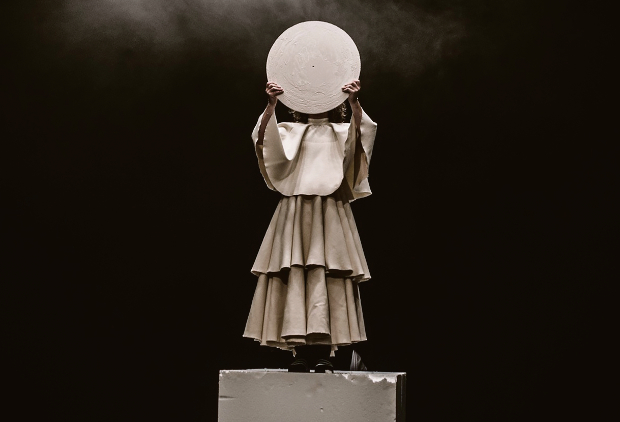 Fruits of Labor, the latest piece by Miet Warlop, is a manic concert put on by performance artists unafraid to get weird. Catch March 9-11 at HAU 2.

Nineteen-eighteen: surging nationalism leads to international war on a never-before-seen scale. Tristan Tzara writes: “Freedom: Dada Dada Dada, a roaring of tense colours, and interlacing of opposites and of all contradictions, grotesques, inconsistencies.” And a century later, we find ourselves responding to a similar political situation with giant plaster fingers, colourful floppy tubes, amplified static, our own grotesques and inconsistencies. Belgian performance artist Miet Warlop describes her newest and biggest stage piece, Fruits of Labor, as “a deep night music performance functioning as a painkiller for the world we are in.” Folks, we need it. Everyone who has joked about needing a Valium might just need Fruits of Labor’s “roaring of tense colours” instead.

Warlop, trained as a visual artist, loves to work with plaster. Last year, her Dragging the Bone featured a series of animated, puppeteered, cracked-open sculptural plaster forms. Her latest also walks this line between tableau vivant and stage performance, and also covers the stage with plaster powder. Warlop and her onstage band animate a series of forms: a disc, a cube, a flaccid finger. Under other circumstances, a late-night break-it-all psychonaut concert without spoken language or narrative, running only on sparkles and adrenaline, could be a mess. But nonsense times call for nonsense parties.