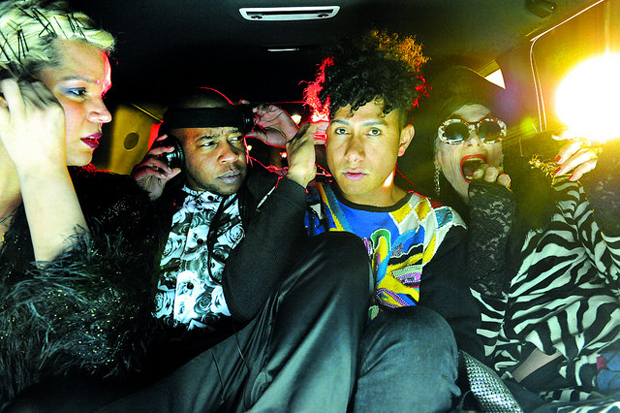 It’s a striking moment in this Ballhaus Naunynstraße show, set in the backstage of a Kreuzberg club – nicely evoked with strip lighting, a shimmering purple curtain and a catwalk-style stage. But Gritty Glamour looks past the glitz to provide a less-than-rosy view into the lives of four queer nightlife stars as they put on a fundraiser for a fellow entertainer, the victim of a homophobic attack. As each performer takes the stage – we see them in silhouette through a curtain – the others wait backstage and discuss their struggles, successes and fears. Aérea Negrot sings us through the trials of makeup artistry. Black Cracker raps about his old-lady fetish. Dieter Rita Scholl presents a video lesson about her rise to fame. Jair Luna does a hilarious bit as a Venezuelan mother, tossing in some abstract movement sequences.

As the show moves between backstage conservation, dreamlike solos and ensemble vignettes, it tackles everything from the trials of house-hunting in Berlin to the city’s best meat (ahem) to the performers’ sexual preferences to darker stories of abuse and rejection. Director Simonè Jaikiruma Paetau – working with a text that draws heavily from interviews – has done a canny job, often blurring the line between performer and character.

Gritty Glamour works best when not forcing a message on the audience. For instance, setting up Cracker’s character as a straight black man who’s just “after some pussy” feels clunky and blunt. The stories are compelling and provocative on their own – I found myself questioning my own prejudices. Despite the occasional rhythmic stumble and overwrought moment, the show is refreshingly honest and beautifully performed. With some cleanup, it’ll pack an even more powerful punch.