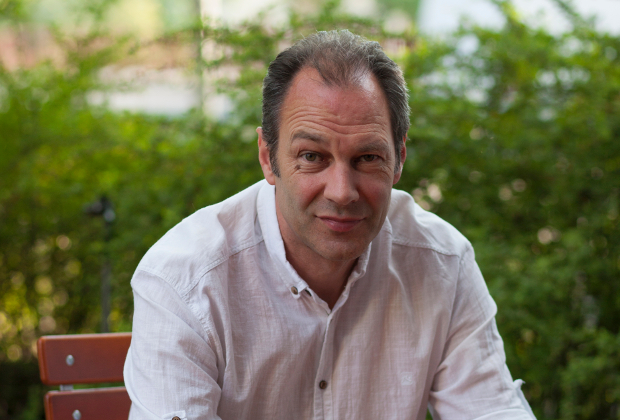 Hans-Werner Kroesinger has spent the last 20 years devising a type of documentary theatre that places him as one of the key figures – if not the key figure – in German Dokutheater. The German theatre establishment is taking notice. Now it’s time for the English-speaking world to pay attention, too.

Hans-Werner Kroesinger loves to read. Loves it. Not in the “can’t put down the latest Malcolm Gladwell” way. Not even in the “has a private library” kind of way. Kroesinger starts the day by reading five newspapers – and then he reads for work. For a recent project on Nazism in state theatre, he read countless biographies, job applications, work contracts, reviews, private letters, banned plays and songs, articles, op-eds and theatre programmes. For a piece on German-Greek relations and the Greek financial crisis, the “document pool” he assembled ranged from Merkel speeches to the minutes of economics cabinet meetings held in 1950s Bonn.

Over 20 years, and 50+ productions, he’s become an expert on a range of conflicts and mass murders, including Germany’s first genocide in colonial Namibia, the decision to erect the Berlin Wall, Rwanda, Lebanon, Darfur, Kosovo… Each takes him about 2000 pages and 10 months of intense research that he conducts with his partner, dramaturge and documentary filmmaker Regine Dura. Every word in his plays is verbatim from a text, from novels to archival materials to secondary scholarship. “We are authors without writing,” he says.

Then enter the actors. “It’s like a seminar.” The first three weeks of the rehearsal process are spent reading the pools of documents that Kroesinger and Dura have assembled from the rough mass of text. Only then do they leave the table to stage the play. “It’s a very democratic process. The actors go through the pools of material, and the group decides what they want to say about the issue. You have to have actors who like to read, because they have to read a lot.”

Unlike Milo Rau’s historical re-enactments (Hate Radio) or Rimini Protokoll’s theatre of experts (Mein Kampf), Kroesinger plays don’t re-enact historical episodes or bring people onstage to narrate their own stories. Kroesinger’s actors don’t act. They shower the audience with a mass of verbatim archival language, demonstrating how easy it is for straightforward narratives – as well as easy moral judgments – to fall apart over time. Listening to actors pull files out of a cabinet and read letters sent between Nazi officials for two hours (as in last year’s Stolpersteine Staatstheater, invited to Berlin’s Theatertreffen last month), might be in turn painful, frustrating, confusing, boring, and captivating. For large sections of the performance, actors and audience members sit together around a huge table listening to testimony. Simple, but powerful.

The particular theatrical form changes with each production. Some focus on language itself, like the aesthetically-spare, hour-long Vermauern, a dialogue between Nikita Kruschchev and Walter Ulbricht. Others, like Q and A – Questions and Answers, are more formally innovative: a video of the Eichmann trial plays in one room, the sound from the video plays in another, and three live actors speak archival text in yet another, showing the familiar situation from multiple perspectives. Kroesinger muses, “When you encounter something in the news, you read the article but you don’t know about the context. The theatre is a good place for people to focus on issues. You see it in the company of strangers, so it gives you another space for communication.”

It takes about 15 minutes before Kroesinger’s idealism about the political power of theatre starts to sound like Brecht. And not just Brecht, but other theatre greats, too. He went to college at the Institute for Applied Theatre Studies at Gießen, which counts among its alumni Rene Pollesch, as well as members of the free scene groups Rimini Protokoll and Gob Squad.

While studying, Kroesinger worked with Heiner Müller and Robert Wilson, both of whom hired him later. His insistence on the power of the fragmentary is straight-up Müller; the echoes of working with Wilson clear in the stagecraft. But Polish director (and Brecht’s student) Andrzej Wirth might have left the biggest mark: from him, Kroesinger learned to focus on situations more than scripts.

He remembers, “Andrzej told us, ‘We’re training you here for a theatre which doesn’t exist yet. If you want to work in this theatre, you have to make it.’” With small-town Gießen offering few distractions, Kroesinger and co. produced a huge body of work with no actors on basically no budget. Good training, he says, for any director.

After graduation, Kroesinger was up for another lesson: history. It was August 1989, and he was working as an assistant on Müller’s famous production of Hamletmaschine intercut with Hamlet. When the group started rehearsing they were in East Berlin; at the time of the production they were in a unified Germany. Now, the eight-hour show had a completely new resonance. “It was like an epilogue to a state that was gone.” And then Kroesinger stopped making theatre. “I thought when the political framework around you is changing so quickly, theatre somehow loses its function.” But he kept reading. He spent a year at Frankfurt’s Akademie Schloss Solitude developing a new style of theatre, based on extensive historical research and altering no word of the archival material: Q and A was born. That was in 1993.

Questions and answers remain at the heart of Kroesinger’s work. For him, the what is the why – he doesn’t want to provide answers, but to lay out conflicting information for the audience to make up their own minds. “Things are more complex than you think. There’s never been a time when there was so much information available. But there was also never a time where we have dealt so carelessly with that information. So theatre is a good filter. Not everyone reads all the papers. But when you put them on the stage, what’s in the archives becomes a public issue.” Whereas the previous generation of documentary theatremakers, like Peter Weiss and Rolf Hochhuth, used documents to convey a clear message, Kroesinger puts in an enormous amount of work in order to keep a neutral stance, even on heated topics.

The piece starts with the recruiting of German volunteers for the Greco-Turkish war, complete with patriotic music. Then the buckets of euro coins come out.

And, to be honest, this ethos makes seeing his plays a lot of work. At a recent weeknight production of Graecomania 200 years at HAU, the theatre was nearly empty. As the lights dimmed, Kroesinger himself came forward and encouraged the audience to congregate towards the front of the stage. German Philhellenism, unbeknownst to this author, has a long history – the piece starts with the recruiting of German volunteers for the Greco-Turkish war, complete with patriotic music. Then the buckets of euro coins come out.

Fast-forward to the debate over Greece joining the EU: should they have been allowed in on cultural grounds, despite not meeting the economic criteria? Plink, plink, plink go pennies into a bucket. The conclusion is a montage of speeches from Greek prime minister Alexis Tsipras, French economist Thomas Piketty and Chancellor Angela Merkel, spoken by actors atop literally precarious stacks of Styrofoam coolers standing in for Greek columns. The play ends with an open question: “What is the proposed solution to this crisis?” There’s no easy solution here – and no easy attribution of blame either. At the end of the two-hour evening, there is sincere but tired applause. No one loiters at the bar.

Maybe this is why few English speakers have heard of Kroesinger: we want history lessons a la Hamilton. It’s more fun for history to have a clear moral compass and sweet rhymes. (It could also, of course, be that his heavily German-language-based plays haven’t toured yet).

But for Kroesinger, ambiguity is absolutely imperative. By rubbing historical sources against each other, “it creates tension and struggle. If you have a lot of conflicts on the stage, you can be sure that there are a lot of conflicts in the audience. We don’t like when the audience walks away and says, ‘That’s right, that’s exactly what I thought.’ It’s more complicated when you give them too many things to work with, so they have to decide for themselves what they would do in that situation.”

May brought not only Graecomania back to HAU, but also a Gorki Theater remount of his adaption of the novel The Forty Days of Musa Dagh about the Armenian genocide, as well as Stolpersteine Staatstheater, Kroesinger’s first Theatertreffen invitation. “I’m happy to be there. But it doesn’t change the work.” He has been nominated before, and he’s been making plays the same way for over 20 years; each opening up for the next… “We did a play, Failed States, about Somalia. A lot of people from Somalia are coming across the Mediterranean seeking asylum in Europe, but they run into [border agency] Frontex – so then we did a play about Frontex. Every production creates new questions.”

Next up? An opera. This month, Kroesinger will make his Staatsoper premiere with Die Luft Hier: Scharfgeschliffen. It seems like an unlikely pairing: what’s the relationship between Kroesinger’s montage of unwanted questions and singing? Although Infektion! is a new music festival, Die Luft Hier: Scharfgeschliffen actually has a long history. About 20 years ago, Kroesinger worked on a piece about solitary confinement. So did composer Matthias Hermann – same theme, same exact texts, but using a singer instead of an actress. The Staatsoper commissioned Hermann and Kroesinger to work together to reconsider the issue – thinking not only about Ulrike Meinhof’s letter from prison, their initial inspiration, but also Russian writers’ texts from the gulag and writers under fatwa.

Hermann’s way of working sounds just like Kroesinger’s: liquid democracy. As the musicians have a lot of freedom, the piece expands or contracts by up to 15 minutes each time. “Everybody who is in the performance is making choices all the time. And when you live in a democratic society, that’s what you have to do. Matthias is responding to the issue of oppression with artistic freedom. He’s a great opera composer, I think.”

It’s no surprise that Kroesinger’s favourite book is “probably always the book I’ve just read.” And in typical fashion, it’s not so much about getting sucked into the story as it is thinking critically about the way the story is told: “Right now I’m in love with this composition we’re working on. I’m reading Ulrike Meinhof’s essays about the Federal Republic of Germany from a magazine called Konkret. It’s very good, stylish writing. But of course, you don’t have to agree with her.”