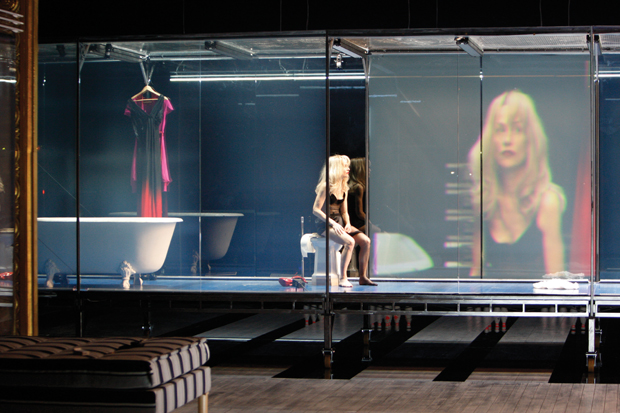 Polish director Krzysztof Warlikowski uses texts drawn from many sources, collaged together to expand the meaning of the original play. Frequently employing the increasingly-popular technique of filming scenes live on stage, Warlikowski deliberately works against the common ideas and images which become associated with plays. His range of materials also extends to opera – his anything-but-traditional production of The Rake’s Progress will go up at the Staatsoper in Berlin in December.

What drew you to the original Tennessee Williams text and led you to decide to focus on the character of Blanche?

I have been reading Williams’ texts for years, especially his prose, his novels that have incredible power of subversion. I’ve also been fascinated with Tennessee and his neurosis, homosexuality, alcoholism, his lobotomised sister who did not manage to fit in an American model of living.

What was your reaction to the criticisms at the Paris premiere? Have you changed anything to the production in response?

I do not make changes to my productions based on reviews, especially since they tend to be so different, from admiration to rejection. It is natural however, that my productions are changing; they live and evolve. I try to see them every time they are played, and sometimes introduce radical changes, but it is never the result of the reviews.

Your method of bringing the actors’ personal experiences into the work through the rehearsal process and into the performance can seem like it would detract from the original text. How do you respond to those who criticize that aspect of the process?

I do not criticize my critics. The reason I use personal experiences of actors is to create very personal theatre. I am not interested in repertoire showing off, or finding accurate illustrations for dramas. I treat the theatre as a tool to know man and the world. In this case, I think it is obvious that an actor is first of all his personality. I do not treat him like an instrument to play similarly to a flute.

Isabelle is a great actress, gifted with incredible intuition and courage. What more can you expect from an actor?

You’ve directed plays from a wide variety of time periods and cultures. Was working with the Williams text more classical, like Shakespeare, or more modern, like Sarah Kane?

Generally speaking, drama only supplies some kind of cores, models that doom the theatre to insincerity. It is something else with Shakespeare or the ancient Greeks. You can also find great themes in the literature of Sarah Kane, [Bernard-Marie] Koltès and Tony Kushner. It is similar with Williams; he was murdered by the psychological realism theatre but, luckily, texts can be re-read using your own intuitions and other texts.

What do you see as the direction of Polish theatre, European theatre, and performance in general over the next decade?

I am not a prophet and I don’t watch many theatre productions. I think borders of visual and performative arts are going to fade away. On the other hand, the artistic theatre and pulp theatre will grow apart. Thinking and getting away from commerciality and entertainment will become the thing of minority.

What distinguishes this thinking variety from the commercial entertainment form of performance?

The commercial theatre concentrates on meeting audiences’ expectations, on adulating them, playing up to their tastes. It hasn’t the courage to propose anything because it fears rejection. If it is created with private money and expected to be profitable, it cannot afford even the tiniest risk, so it follows common patterns. It sings songs everyone knows because these are the favourites, or at least the most acceptable. Unfortunately, that is how most theatres in the world operate. Fortunately the artistic niche has a greater power of influence.

Your productions often rely on multimedia technologies. Why has filming become such a central part of your style?

I often use cameras in my productions to observe live scenes on a stage. It‘s not only for showing close-ups. I am running away from the theatre. A film, especially if it is live, helps me to create different language, different narration. It is neither theatre nor film. It is rather something in between and it is very appealing.

What you mean by “running away” from the theatre?

I’m referring to this whole unbearable convention that turns theatre into a social event rather than an intellectual and emotional experience.

What I care about is blurring borders between the theatre and life. That is why I attempt not to have a distinct beginning or end in my productions in order to merge them with my audience’s lives. The main advantage to this kind of approach is the connection you make with the play cannot be easily broken after leaving the theatre. You are forced to think about it, to go through what you have been given to consider. A film helps me to do so. It creates an actor’s presence in a different way, depriving it of this theatrical existence that is so unreal. The film creates reality that theatre deprives itself of.

EXBERLINER is giving away two pairs of tickets for the show on 23rd of November! Email [email protected] with the subject line ‘un tramway’ by Friday, November 11 at noon for your chance to win. Don’t forget to include your full name.