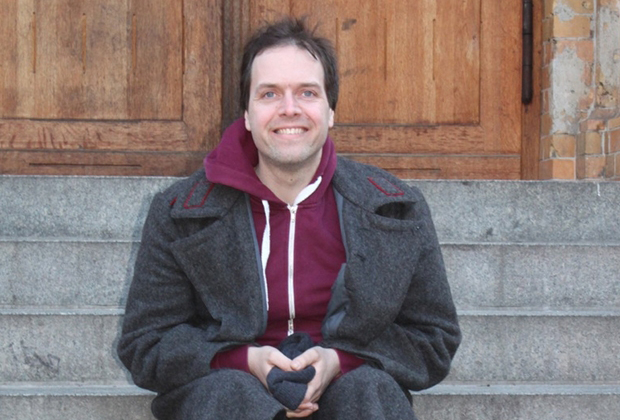 Berlin’s theatre maze can be difficult to navigate, especially if you don’t speak German. Thankfully the last couple of years have seen an increase in English-language subtitles and new opportunities for foreign-language productions – including the Out of Berlin monthly series in Friedrichshain’s Theaterkapelle.

With training in German conservatory and experience with more American traditions of realism, O’Beirne is positioning the series as a platform for his brand of theatre born out of the Meisner technique, as well as for the assortment of performance styles in Berlin.

This makes for a combination of new plays from around the English-speaking realm mixed with performances from Berlin expats, all in a chapel turned theatre venue. April’s show (April 2, 20:00) Nuthouse promises a radio play in the absurdist tradition from Bernie Logan and Klaus Ebert, a duo that’s no stranger to Berlin stages.

How did you find the artists for the April edition of the series?

They used have a concert every Tuesday at East of Eden. And it turned out to be like a living room for a community of English speaking people, whether they’re Australian or Scottish, Irish, anything, or just friends. East of Eden closed but I got to meet Bernie in that context

Why the number of staged readings in the program?

The staged reading format is nothing I insist upon, staged readings are just cheaper than a full production. With Nuthouse it’s actually an artistic choice, because that’s actually what he wants to have, like two microphones, think of it more like a live radio show, two guys doing funny bits that they read off the paper while another guy does some music in the back, that’s the format that they have. I haven’t seen it yet because he will write the script specifically for that night. So they’re rehearsing and producing it specifically for this particular show.

What is your opinion on the independent Freie Szene in Berlin now, especially for expats?

As Germany has a comparably huge network of state-funded theaters all over the country freelance artists find themselves in a different position than in other countries. To put it polemically, the “system” sucks up a great deal of the talent in this country (as it pays living wages), but at the same time that very system suffocates a lot of talent, since it is a very bureaucratic work environment. This leaves the Freie Szene with people that couldn’t find work otherwise and who are not talented or skilled enough to produce quality in an environment of scarcity.

Of course there are remarkable exceptions to this, but both the “system” and the “Freie Szene” are dramatically dysfunctional. “Off theatre” has a bad reputation in Germany and I can understand my expat friends who, after several bad experiences, are reluctant to join yet another no-budget project with a dubious outcome.

A lot of the freelance expat artists are much more skilled than their local counterparts, again put polemically: as a well-trained expat artist you may find yourself with a language barrier in an underfunded scene full of narcissist (and out of luck) idiots.

What about German theater in the “system” then?

A thing that is local to theatre in Berlin – and German Regietheater [director-oriented theater] altogether – is the dominance of “postdramatic theatre”. When was the last time that you saw a new German play after which you thought, “that was an amazing character!” or “Great dialogues!”? I’m not against new forms of theater, but I find it a great loss that well-written plays are not appreciated as much as they should be.

What do you see as the future for OOB?

OOB is a platform for different types of perfomances and events – solo performances, staged readings, multimedia stuff etc. Hopefully this will get enough attention to a: grow a regular audience and b: attract talented artists.

As long as I consider someone talented enough – or relevant to the topic of a certain event – everybody is welcome to present work in the series, maybe even to workshop something new and present it in an early stage of development: I’m willing to take the risk that I might be the only one who likes it.