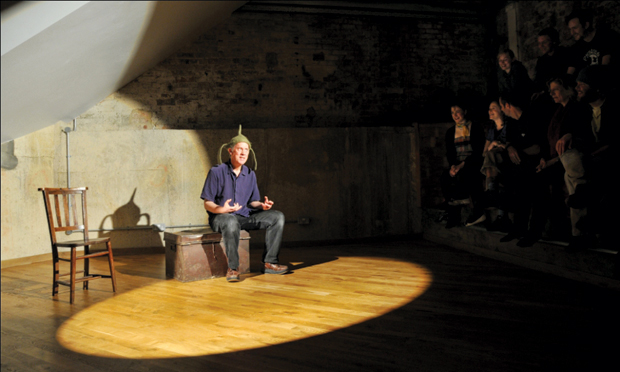 British performer Jonathan Kay is a fool, but he’s not stupid. He uses his unique form of improvised storytelling to create one-of-a-kind theatrical experiences in Know One’s Fool on October 4 and 5 at Hoftheater Kreuzberg at 8pm.

Self-proclaimed “21st-century fool” Jonathan Kay takes a direct approach to theatre and improvisation. But that doesn’t mean that it’s any less robust. The fool lives only in the present and uses this immediate access to reactions and emotions to point out what lies beneath our everyday lives. This simple philosophy for improvisation creates a stark contrast to most of the conceptual text-based theatre on Berlin stages.

When did you first start “fooling”?

Gradually, over 40 years. There was not a particular revelation except a sense that I would be a fool to be on stage with nothing in my head. This understanding sees “thinking” as retrospective activity to the moment which has no thinking in it. The moment is the key, which thinking can unlock or lock out.

What is your inspiration?

Inspiration lies hidden everywhere. A fool knows this and plucks this out to share.

Improvisation is an important part of your show, how do you use it?

We are all improvising. We are not on a script in everyday life, but there are hooks and habits we string our lives together by. The only thing that is untainted is the moment in which, like new-fallen snow, we can begin to relate, some split second of free connection.

Clowning seems to be mostly limited to children’s shows today, but your show is certainly aimed at an adult audience. Are adults more difficult to reach?

When adults present themselves, they have been through a lot emotionally and learnt gradually the role they have taken up. An adult has a feeling of conviction that can feel like a sentence in a prison or a crusade. Adults can be hiding their true self, which can be turned into a distinct dream or vision or a practical outcome. Pragmatic adults include their childhoods.

Do you think there’s still an active element of social criticism in mainstream comedy or is it mostly entertainment?

It hovers between acceptable and fashionable entertainment. Pushing this edge of normal cannot be on television or in established menus of comedy. Not because it’s unacceptable but because there is an embrace which can suck the life out of comedy. Social criticism can take the mood of the time, but in a few months the menu has changed. Tragedy and comedy are fresh and untouchable.