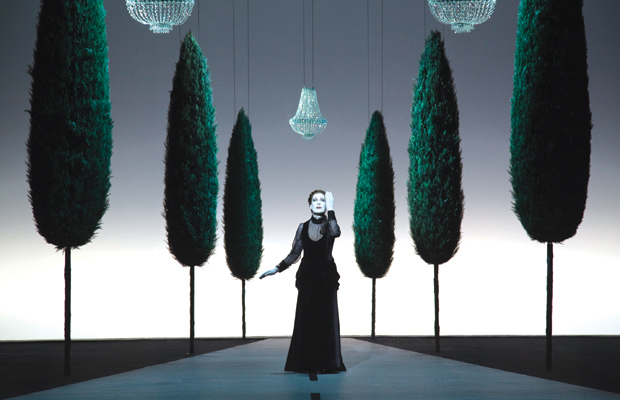 Three of the prolific formalist’s productions are currently in repertoire at the Spree-side Berliner Ensemble, the most recent of which, Frank Wedekind’s Lulu with music by Lou Reed, was met with both adoration and confusion at its April premiere. From its 19th-century costuming to 67-year-old Angela Winkler as the title character to the blend of English and old-fashioned German, the piece is unlike any Lulu you might have seen before, or are likely to see again.

EXBERLINER caught up with Wilson on the day following opening night to chat about Lulu and his upcoming projects, including the highly anticipated The Life and Death of Marina Abramović, premiering at the Manchester International Festival in July.

How does the morning after feel?

I’m so tired. I actually worked until the audience came in last night. I was still cutting and changing and I would love it if I just had two or three more days just to… I mean, sometimes they fall into place easily, and sometimes these babies are born kicking and screaming. This one was really kicking hard.

Were there complications with the birth?

Lou Reed has not been in the best of health, and he never did come, so he sent music. Lou and I have done other works together, but he was always there. So I could say, “Hey this doesn’t work – could you change it?” I have five actors that don’t speak English and Lou had written a lot of texts – long, long texts. It was impossible for some of the older actors from the GDR, so it took some time to sort that out. Some of the actors had never done anything like this. They do psychological naturalistic acting and they want to know why they do everything in every scene. I don’t know why I’m doing anything, and I don’t want to know why I’m doing anything. I always say: if I know why I’m doing something, I can’t do it.

You made some last minute adjustments we heard.

We previewed the piece on Thursday. It was really a disaster. A lot of people left, which is okay, but it was confusing. You know, when you’re working on something, sometimes you see what it is, but then you realize no one else sees what you’re seeing and that’s okay, but big headlines seemed to be missing and so I had to reorganize everything and I worked on it till the very end. I guess it’s okay now.

What is it like to direct a piece in German, a language you don’t speak?

I just listen very carefully. I stage the whole work silently first, so I work on the visual side: I work on light, I work on what the stage set will be like. Then I work on the audio, and I often turn out all the lights and you can’t see anything and you just listen to what it sounds like until that seems to be working… If I shut my eyes, you see, I hear better, because I’m not visually distracted. So I work on it like that, and then the challenge is when you put the both of them together – this dualism, parallel structure – can they reinforce one another without having to illustrate or decorate one another? Usually the action tries to illustrate the text, and in this case, the visual should be as important as the audio. The Lord gave us eyes and he gave us ears. What we see is as important as what we hear.

How do you work with the actors?

I say to them often, “I don’t believe you,” and I work with them on articulation. I give formal directions. I never, in 43 years of working in the theater, told an actor what to think. I’ve never talked about it, so they can think whatever they want. I give formal directions: they should be quicker, slower, more interior, more exterior. The text is too flat – put space behind the words.

Tell us about the project with Marina Abramović.

Well, I’m still working on it. I’d known Marina, oh since my first play in 1971 in Paris, a seven-hour play in silence, and it went to Belgrade and I was young. And crazy. And now I’m old and crazy.

Is there a difference?

I can’t believe some of the things I did when I was in my twenties, late twenties. I was at a press conference when they asked me something and I said “Dinosaur“ and someone else asked another question, and I said “Dinosaur, saur” and just kept going on and on, and Marina was in the audience. And, I don’t know, about a hundred people were there. This thing was supposed to be 45 minutes long and it went on for five or six hours. People started coming in to watch this madman and it began to be this whole discussion going on. And I would go “Dinosaur, saur, sore, soaring-guh.” So afterward Marina said, “That was great and we should do something together.”

[A few years ago] she said, “I want you to design my funeral and direct it.” I said, “Okay, I agree.” She said, “I want to know what it’s going to look like.” [laughs] And then she asked me to direct this opera on her life and I said, “Why don’t we open with your funeral?”

What else does the future hold?

I’m 70 years old. My father said to me, “If you’re fortunate in life, you must return to the earth what you’ve been given.” And I have been blessed fortunately and so I really am now interested in this center [The Watermill Center, in Long Island] where we can showcase young and emerging artists’ work. What I’ve tried to do with Watermill is sort of go back to my roots.

I could spend the rest of my life working at the Paris Opera or La Scala or the Berliner Ensemble, but I didn’t want to do that. My first play was written with a 13-year-old Afro-American boy who was deaf and had never been to school and knew no words, and the play ended up being seven hours long and silent, based on his observations. It would be very difficult to do that at one of these big institutions – that’s why I started this center.

And one of the projects I’m very excited about is through the Sackler family – that’s with scientists and artists, so Marina’s now working with a very famous scientist for the brain. [At Watermill] you start with a blank book – you don’t ever have to produce anything. You can fill in the pages.