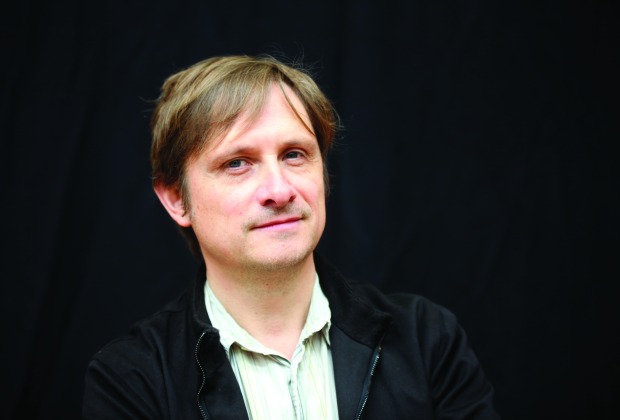 Part of over a dozen artists participating in HAU’s epic June production, artist and theatre maker Chris Kondek transforms a hospital into the interior of a human mind.

Coming up in the New York theatre scene of the 1980s, American video artist Chris Kondek collaborated with the Wooster Group and seminal artists like Robert Wilson and Laurie Anderson before relocating to Berlin in 1999. He has created video for some of the city’s most influential theatre directors, including René Pollesch and Stefan Pucher, while his award-winning work as a director – dealing primarily with money and financial markets – has been staged throughout Germany.

This month he’s part of the impressive crop of artists enlisted by Lilienthal to take on a passage of Infinite Jest and transform Wallace’s depiction of an exhausted future society into live performance.

How is your part of the project going to look?

I have a pretty good slot in the evening in an old broken-down hospital building in Neukölln. Originally I wanted to use a bunch of meat lockers that were next to the kitchen, but now I’m in the Bettenhaus where patients waited, slept and hung out. I’m doing a section of the book that’s the story of this guy Ken Erdedy, and basically he’s got a marijuana habit where he binges. He’s decided that he’s going to buy a couple of ounces of pot, which he’s going to then smoke in like a day and a half. And generally whenever he does this binging, he sets up a whole system so that no one will know. He leaves a message on his answering machine: “Oh, I have to run out of town really quickly.” Then he locks himself up in his room. It’s a real addict kind of thinking: “I don’t want to smoke pot anymore, so I do it just one more time, and I’ll do so much of it that I’ll feel so bad afterwards that I’ll never want to do it again.”

Is there action or is it just a stoner in a room?

When the scene takes place, the woman who says she’s going to get him some pot is four hours late, and this has set his whole system out of whack. It’s basically a two-minute or three-minute scene that’s expanded into 30 minutes of interior monologue. In this eight pages of text he’s bouncing off the walls and then he’s complaining about not paying her in advance and then he is also focusing on a cockroach that’s running through some bookshelves where the stereo is, in and out of a hole. He’s doing some sort of hyper-mindfuck on himself. So that’s what I’m going to do in this Bettenhaus: I’m going to try and make it as if you are walking through someone’s mind, some kind of broken-down mind interior.

Exactly, and you hear all the things. It’s true, you know, that in the 10 minutes, between when I made this glass of tea and your call, I probably thought of a thousand things. So the piece is going through all of those little things.

For those planning on getting on the bus for the show, would you recommend possibly also indulging in substances?

Well it’s a 24-hour trip and whatever helps you go on that trip, I would say do it. Yeah, why not?

How do you think the project will go down overall?

The thing that seems crazy to me about this Infinite Jest project is that it’s kind of a logistical nightmare. That makes it kind of crazy and kind of fun: this image of busloads of people using the city of Berlin as if it’s some kind of book that they’re driving through.

What advice would you give young artists in Berlin?

What I was really amazed at when I first got here was that things could be so pleasant. What’s masquerading as energy in New York is really stress I think. But here it’s possible to live in a kind of pleasant way. I could just have a real space because things were so cheap. On the artistic side, I have such an odd way of working, and I can’t do a lot of things. And now the things that I make are quite quirky and sometimes weird and haunting, but they work on stage. I’ve found a way to get energy out of them. That just had to do with remembering to do things in the stupid way that I do them, and that started to work out for me.

You made a name for yourself making videos for other performances. Is that still your bread and butter?

I get paid much better doing an opera than I pay myself to do an experimental theatre piece. I’m at a point where I have to decide what I want to do, or at least I have to manage it better, because I would like to make more theatre pieces. I would like to continue to work out what a sort of theatricalisation of video means.

What kind of project would you like to make if someone gave you infinite time and money?

If it were me making something, I wouldn’t want too much money. I think it’s dangerous to have too much money and too much time, and actually a little more stress makes it better. I think the whole financial system breakdown is really fascinating, especially now in Greece with the new elections. It’s interesting to see what happens at the point when people come up against the banks, against a state that’s not really functioning, if I could find a way to make something about that, I would love to.