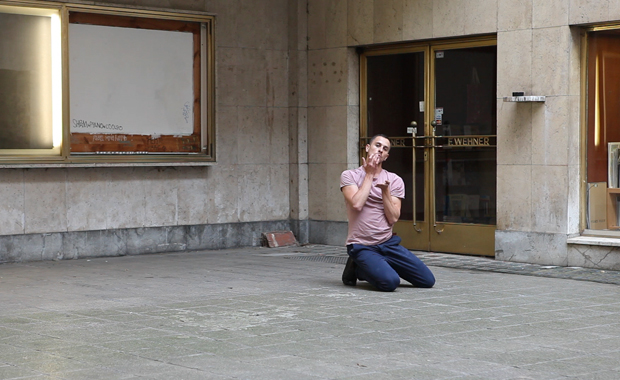 Leaving Australia for the Royal Ballet School in London, Adam Linder was immersed in the intense world of classical dance from a young age. He broke away from the ballet world in favour of working with Meg Stuart in Berlin, and is now hyphenating his dance career with “-choreographer” and beginning to make a name for himself in the often equally rigorous contemporary dance scene. His most recent work Ma Ma Ma Materials is one of the key performances in second part of the tanzfabrik’s Herbstfest weekend of new performance.

How did you begin collecting materials for this piece?

My starting point was the idea of the performing body being multifaceted. And in being this kind of container of projection: it has the stability to do narrative story telling or to carry an image or to work with temptation. Then I looked at certain dance aesthetics, at popular culture sources, iconographic symbols that have been heavily reproduced in the collective visuality. I have an interest in this high/lowbrow dichotomy and in what constitutes style.

The focus on the body as a material makes the elements of show in dance less important, which is similar to classic modern movements like the Judson Church in creating a dance that was more stripped down than ballet…

I think dance is really codified and even forms that are being described as experiential, derived from research – I found them very codified and in my work I’m really fascinated by that and with what constitutes these languages and what are the preconceptions that should come with them or how they became codified. It’s very hard to escape that and so I decided to use it! And focus on it a little bit.

The world of contemporary dance can seem like a bubble that’s kind of hard to break into or understand.

I think dance has a very strong core but maybe it is slightly off the centre or off the beaten path. I meet a lot of people who say they don’t know a lot about dance but they’re very well-rehearsed in literature or art. Maybe contemporary dance doesn’t have the same economy as other art forms like music, or visual art, or formatted music videos. It’s funded predominantly by state funding, whereas with music and visual art and literature, maybe their economies are more multi-layered and therefore the means of dissemination become wider or more nuanced. Maybe it also comes down to this elemental thing; dance generally is ephemeral and abstract.

There’s also the marriage with musical culture, collective party culture, drug culture – dance is hand in hand with that. Generally when we talk about the contemporary dance scene we probably don’t consider Sunday morning at Berghain. My background is with a really rigorous classical training at a ballet school, but before that in the mornings I would run downstairs and watch music videos and maybe that is the richest visual stimulus I had as a young teenager. I did street-dancing, hip-hop, jazz. These things ARE in my body, and my body IS faceted like that.

So Berghain is part of contemporary dance?

The potential is there, and the rigour is also there: a certain willingness to throw the body in which is maybe a similar drive to getting up and doing ballet classes on a Monday morning. Berghain is codified – we face the DJ, we take certain drugs, certain music goes with certain drugs. There’s a very specific type of light that’s used. And there’s definitely prominent styles of dancing that arise there, like geometric techno hand dancing.

What was it like to work with Meg Stuart?

She’s amazing. Meg’s the real deal. It’s very demanding – rightfully so. When I started working with Meg I didn’t have such a strong experience with improvisation and she works so much with that and with organising, constructing, working with material you propose. That’s her methodology. And with Meg I started to use language.

So tell us more about this use of rapping.

I got interested in this idea of a vernacular language: you take this formal rigorous English and then it gets somehow moulded and manipulated and this new language becomes a resistant language towards the dominant hegemony of the English language. Rapping is a playful irreverent monologue or singular poetic voice that is commenting directly on the environment around you. You make your context transparent and then you can fold into that really interesting mechanisms of appropriation and signification, quotes from things, shout outs to things. The way that I’m dealing with this is not in a European art scene way where I have an imperialist attitude – I’m borrowing a lot of methodology but my content and my way is really my own. It’s the form that I’m interested in: its play with authenticity, play with what has come before and what it predicts. And I’m not commenting on it, analysing it – which I think is more of an ethnographic approach –  I’m IN it. I’m really trying to just be IN it.

What do you think about being based in Berlin now?

My relationship to Berlin is a bit salt and pepper. I really love it and some things about it really bug me. Somehow you’re not at the mercy of these things that are pulling at your coattails in a big city, there is room here. People do invest in other people, in a discussion, in a critique, going to see stuff. I lived in London for nine years and it was much more of a hard life. It toughens you up: I learned how to produce things and get things organised. But in West-End I was struggling to get from one side to the other and I thought I need a break from this. That is what Berlin is about. And now after three years I miss a big city!

What piece of advice would you give young artists in Berlin?

There’s a lot of dancers here and not a hell of a lot of work. Maybe you have to come here with this real drive to carve out your own way and create your own resources. It’s definitely not as hard as New York: it’s Europe, which is very well funded for arts. But you have to come with your own will and tactics.