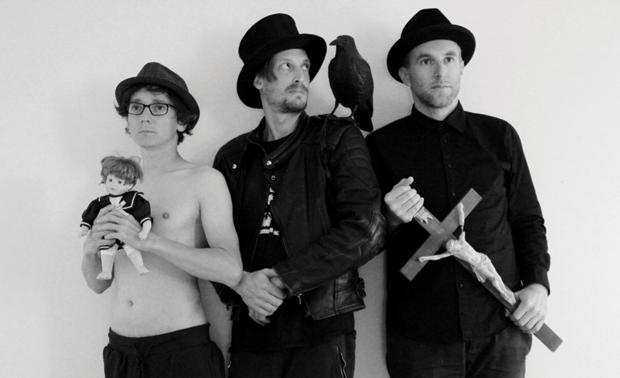 God’s Entertainment have made a name for themselves in the Vienna off-theatre scene for performances that blur the line between theatre and reality. A group of artists from various disciplines led by co-founders Simon Steinhauser, Boris Ceko and Maja Degirmendzic, their works often involve a non-traditional space or interactions between the audience and the performers. New work Cleaning, babysitting, I help in the house – 7 Euro uses Rainer Werner Fassbinder’s Katzelmacher as a base to address the difficult subject of low-wage labour by turning the spotlight on these workers.

Why did you decide to tackle this topic?

Simon Steinhauser: We wrote the first version of the concept in Vienna, where sometimes you see people standing on the street and just waiting for someone who will drive by and pick them up for work, like prostitutes for sex. For example, there’s 500 people waiting in the parking area of a home improvement store in the morning. It is not as obvious in Berlin at the moment because they’ve moved inside bars. But I was also told that you can drive to the Polish border and pick up people there. But we cannot prove that.

What kind of workers are you incorporating into the piece?

SS: All of those people work with their hands, either they work in construction, or they clean windows, or they do other tasks around the household. Normally we like people to give us stories that we can create ideas and scenes from; in this case we’re working with about 25-30 people from 15 different countries. We take the real conditions and write some texts, and take pre-written texts – for example, interviews we find in the newspaper – and then we collage together these materials.

So it’s less about individuals’ stories and more about the situation in general?

Maja Degirmendzic: It’s more about how far the market and labour structures changed through the EU expansion. It’s about the price of Romanians in Germany, of Bulgarians, etc.. The labour market is changing, so it’s not about the individual, it’s about the value of his labour.

Do you think that theatre can change our society?

SS: Of course. I think in some way everything can change. Especially if you’re not just in a theatre, but also in public spaces, it’s a medium maybe to not change things but to question them.

Is there a solution to this continuing devaluation of labour?

SS: Solutions are very distant in some ways. I’m not against the EU, I don’t have problems with people coming here, but it’s a circle of things you can’t break out of. What we can do is put people on stage who we’re almost never in contact with. Because you and I work more or less officially, and we get paid enough to go for a coffee if we want, we are not connected with those people standing on the street working for €10 or €20 a day.

MD: Whether theatre can even offer a solution is a question. It can confront individuals with larger issues and this builds a public discourse, which can grow if it’s picked up by the media.

SS: As a group we don’t take a certain position. We use left-wing symbols and right-wing symbols, we don’t judge. We want to open up the topic and let people see themselves in this constellation. We don’t want people to just come out thinking, that was fun. We want people to have to ask themselves: what is my position about this?