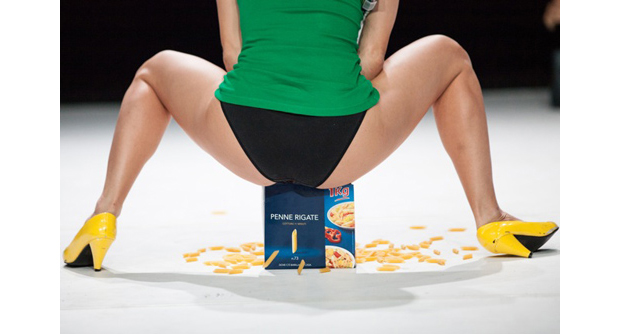 Nicola Mascia and Matan Zamir, two proteges of Sasha Waltz, present To this purpose only May 23 and 24 at Radialsystem V.

Sure, there’s a scene about defecating pasta. And (spoiler!), the performers are fully nude. But To this purpose only, making its German premiere at Radialsystem this weekend, aims to go beyond the clichés of contemporary dance. A collaboration between Berlin-based duo matanicola and young Italian dance collective Fattoria Vittadini, the piece digs into stereotypes of Southern European culture and history.

Italian-born Nicola Mascia makes up one half of matanicola (his collaborator is Israeli choreographer and performer Matan Zamir), a twosome that has worked with the likes of Benoit Lachambre and Ohad Naharin. Both Mascia and Zamir have also worked with Sasha Waltz, one of the most important figures in the German dance world: a pioneer of dance theater, known for bringing architectural spectacle to the stage but also for letting her dancers improvise. Mascia spoke with Exberliner about how the piece came about, what he learned from Waltz, and the story behind that pasta.

How did the piece come about?

It started three years ago. We met some members of the Fattoria Vittadini – a young Italian company from Milan – and they told us about their idea to have a group of performers that invites choreographers to work with them. We spoke about the idea of making something together. We did most of the creative projects in Italy, and being Italian, we wanted to do something about Italy and being Italian. That was the initial spark.

How does it engage with and question Southern European stereotypes?

We wanted to develop and include in our idea of Italy a more geographical and sociological Southern European identity. Matan is Israeli – so also from a Mediterranean country – so we have very similar cultural backgrounds, and we wanted to pinpoint not just Italy but more of a Southern European sense for life, historical backgrounds and lifestyles. That was our intention.

How does this play out visually? In other words, what can the audience expect?

The piece is like a painting in three separate parts. The first is a kind of homage or look into the past and into the cultural heritage of Italy. The performers are fully naked, and they shift from one formation to the next, almost creating different sculptures and formations that remind us of existing work from the Italian past. The second part is very colourful and contemporary. It’s very cynical and we play with clichés and modern Italian society and culture, in which publicity and television is very present and ultimately disruptive. The third part is more spiritual, and in a way more dreamy. There’s a bizarre encounter between three priests and three clowns. I won’t say any more.

How do you think your piece will be received by the sexually liberal audience of Berlin?

I think people will understand it. With these three different chapters, I feel there’s something everybody could relate to. The work is definitely talking about a specific culture, but we always try to employ a universal language – audiences in different countries should see a part of themselves in our work. That is our hope. But why do you mention sexual liberation? It became kind of a trend in contemporary dance to use nudity, and most of the time it is used in a very provocative way. For us, it was a process to convince the performers to do it and to give them a strong reason to be fully naked, but we wanted to expose the purity and the innocence of the human body and the power it carries. At the moment – as audiences – we forget there is a sexuality connected to it. It’s more like a sensuality, I would say. We played very much upon this nuance on the use of nudity in the work.

How were you affected by working with Sasha Waltz?

I started working with her when I was 20, so that’s almost 20 years, and Matan has also been working with her for around five years. Working with her has been very influential for my development as a performer, but also as a creator. Especially in her early work, she used each and every person as an individual and whatever differences we had were fostered and welcomed. There has been a tendency in dance over recent years to try to unify the bodies and try to always have perfect and very similar-looking bodies on stage. In her case, it was the opposite. There were very different bodies on stage, and very different people with different backgrounds and looks. But each and every one was able to give themselves to her overall vision. So that influenced me very much as a performer and creator.

On the Radialsystem website, there’s a photo of a person sitting on a box of pasta. What’s the story there?

That’s from the second part – the part in which we play more with the clichés and with the problems of Italy today; from the misuse of the female body and the overrated importance of the television in daily life and culture. She’s actually shitting pasta in that scene. The second part is very fragmentary – there are a lot of different images and situations happening on stage, one after the other or multiple actions happening at the same time, so it’s an accumulation of all these different elements which become an overall chapter.