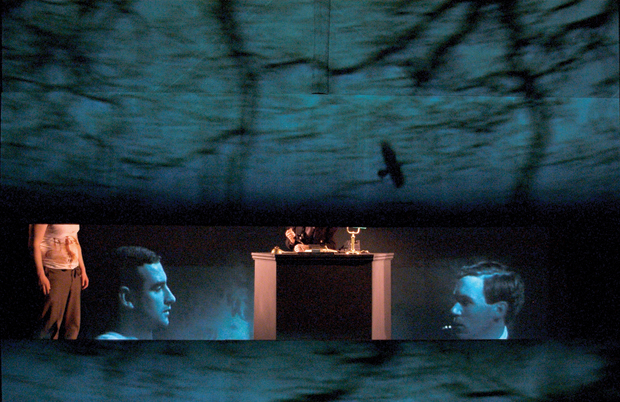 A night porter at a hotel in an unknown war zone is haunted by the demons of his past in this experimental theatre piece by Leeds-based company Imitating the Dog. The production has garnered rave reviews for its unique blending of film and live-action, as the actors perform alongside – or in the middle of – their on-screen doppelgängers. Since its premiere in 2006, the work has toured extensively from Brighton to Beirut, and is now receiving its Berlin premiere at the English Theatre (thanks to the noteworthy support of the British Council).

What lead you to the rather dystopian subject matter of Hotel Methuselah?

I think all of our shows are bleak in that they deal with people who are suffering some deep psychological trauma or sense of loss. We are drawn to places where this loss accumulates and expresses itself – like hotels, hospitals, war-torn cities – where the normal is stripped away, leaving space for a different kind of intense experience where people can speak about their feelings, their desires, unhindered, you know, in a very direct way.

What’s behind the reference to Methuselah?

Methuselah is the oldest character in the Bible and supposedly the oldest person that ever lived – 969 years. We liked the idea that this hotel was really old – as old as time – and that there were thousands of other  trapped souls, like our protagonist  Harry, living in this hotel, enduring  their own version of what Harry goes  through – learning what happened to  them in their previous lives. This is  why we have the whispering voices in  many languages and we glimpse into  the other rooms that Harry passes when he runs through the hotel’s endless corridors. I need to make it clear, though, that we are drawing on this Christian imagery because it has informed our world, but we are using it metaphorically, not literally. We love the stories, but not necessarily the belief systems that support these tales.

When you look at this production now, is there anything you’d like to change?

Well, I’ve seen it so many times now, it’s hard not to want to change bits and pieces. Some of the animation feels dated and I would love to re-film some of the glimpses into rooms. But on the other hand, I like its dated feel – I mean, the actors are now seven years older and it’s really interesting to watch them play against a younger version of themselves. It’s about being trapped in time.

Have the cuts in UK arts funding changed the way you think about making work?

It’s not a good situation at the moment. The cuts, for us, are really being felt in that it’s much harder to find venues – they simply cannot afford to pay for the middle-scale work that we are currently making. Now we are being presented with possibilities to work in bigger theatres, but this brings with it certain restrictions – perhaps to be a little less experimental. On the other hand we get a great deal of support from the Arts Council and the universities that two of us teach in – Lancaster University and Central St. Martins in London.

What has been the most memorable reaction to the production during its years of touring?

Probably the showing in Beirut – when somebody stood up in the post-show discussion and said that the lines about not knowing whether you would wake up in the morning really spoke to her living in that city. There was an intense reaction in Lebanon, for obvious reasons, to the performance. It’s a city that is always under the threat of war – bombs went off just after we played there.