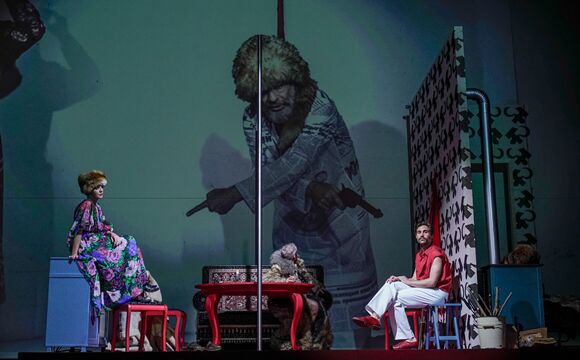 “What? Melissa gets everything?” cries Kathrin Angerer, and even though we will never find out what it is Melissa gets everything of, or who Melissa even is, Angerers outrage is poignant. The Deutsches Theater stage looks like the perfect illustration of the term Salonkommunismus: a living room filled with Soviet devotionals. Together with her five co-actors, Angerer is trapped in ‘post-revolutionary depression’. They try to plan a bank robbery, muse on the hypnotic effect of dialectic thinking, analyse Brecht’s The Mother from a critical feminist perspective and change their costumes every half hour, looking more glamorous each time. Even though it’s not the most energetic example of a Pollesch play, Melissa kriegt alles makes for some good entertainment on the fashion side with Martin Wuttke pole-dancing in a nightgown sporting a Pravda-newspaper print, and Katrin Wichmann transforming herself into Anna Karenina (“I’ve always wanted to play Anna Karenina!”) simply by adding a fur hat to her flowery dress. As excerpts from the film The Producers are projected to the back wall, the audience is left to decide what’s ‘real’ and what’s not, and who, if anyone, should get ‘everything’.