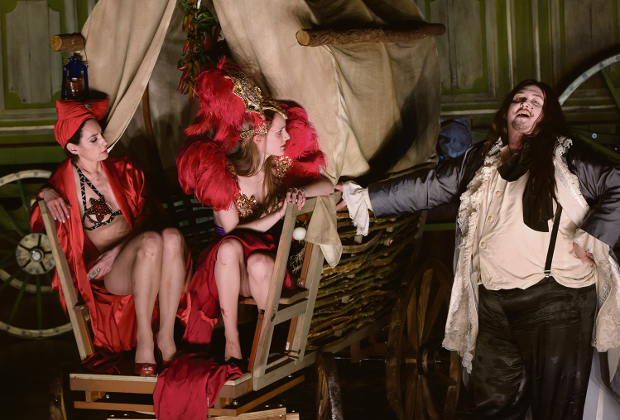 A lot of German critics are squeezing little op-eds about Castorf’s departure into their reviews of this play. But since we’ve got that covered (grab our summer issue – on newsstands now), let’s try to focus.

Cabal of Hypocrites begins with Sophie Rois rumbling in the darkness for a good 15 minutes as a screen blinks quietly behind her about the birth of the great artist, Moliere (text via Mikhail Buglakov’s play of the same title) – her smoker’s rasp screamed-out from a decade of Castorf performances. The lights come up, and we are told, more or less, the story of Moliere at court through filmed live-feed projections. The actors play in a striped “Ottoman” tent and a tremendous baroque rolling stage wagon (hats off to designer Aleksandar Denic) where Racine is played in vampy French. There are women tottering in heels and incest intrigue; there’s commentary on the nature of directing through Fassbinder’s Beware a Holy Whore, a movie-within-a-movie-within-a-play.

We’d call the collage “high-intensity”, except that it drags so much over the five-hour performance. The inside jokes about the Berliner Ensemble’s Leander Haußmann and not-so-veiled commentary on Castorf’s own cult of personality were gettable but banal references; the Fassbinder Cuba Libre references are “deep cuts” at best (give away complimentary rum-and-cokes during the intermission and then we’re talking). The whole affair feels more like a going-away party for Volksbühne longtimers than a public performance. That the Volksbühne is the ordinary “people’s theatre” becomes its own punchline.

Not that there aren’t moments – a boy who lives in a piano provides a rare touch of magic; wig-slips and slapstick misunderstandings bring some laughs. But, uh, so what? People of colour swept the Tony awards, the news cycle has been grim and hateful, the ice caps are melting, and Castorf rants, through the double-blind of Bulgakov and Moliere, about artist autonomy. But maybe art, more than ever, requires not autonomy but responsibility: responsibility which Castorf, like a teenager, flouts. The freedom of the artist! The freedom of the artist! We have to ask – from what?