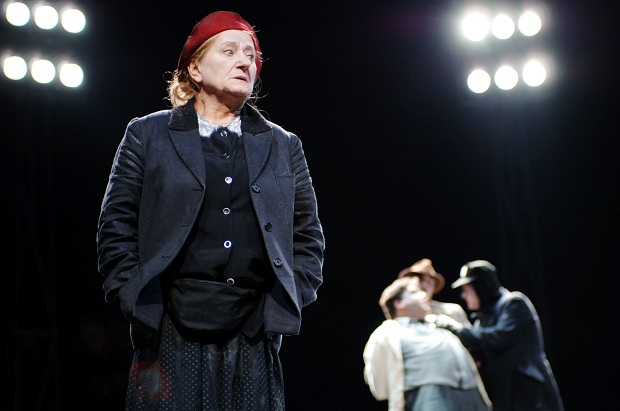 Let’s not mince words, as the play doesn’t mince its intent: Bertolt Brecht’s 1939 Mutter Courage und Ihre Kinder is heavy-handed in its approach to war. But then again, war isn’t known for its great subtleties either. Renowned as the greatest play of the 20th century, it delivers a decisive judgment on those who profiteer from war and is still relevant in today’s military-industrial complex society. In contemporary society, the characters may be just as despicable as Brecht’s, if only they would be hoisted by their own petards.

Although part of what Brecht called “Epic Theatre”, today’s repertoire production, directed by Claus Peymann, only follows the tenants of his concept through its simple sets and music. The stage is almost exclusively occupied by a large, unwieldy wagon and the actors (except for the end of the play) and one can’t help thinking that those actors will lose control of Courage’s wagon and send it careening off the tilted stage and into the audience at any moment. The simple, yet wonderful music of Paul Dessau accentuates how tangible little the audience needs to work with. But it’s obvious throughout that the burden that the actors must carry isn’t the cart but the immensity of the material that Brecht provided. And it’s masterfully accomplished by a knockout performance from the star herself – Carmen Maja-Antoni.

The weathered looking old lady is so stirring in the role of Mutter Courage that you actually think the traditional four rounds of ovation are completely deserved. Even though it’s difficult to sympathize with her plight, she makes total self-interest compelling without turning her into a Mr. Burns level of capitalist parody. She manages that balance between a character already hardened by her conditions and yet still touched somewhere deep inside (for just a moment) when she finds out one of her sons has died and Maja-Antoni delivers real tears on stage.

The other actors do a fine a job as well, with a notable turn by Christina Drechsler as Courage’s mute daughter, Katrin.

All in all, an extremely well done production of the famed play, still delivering a punch more than 70 years later. Just remember to put on your Deutsch-goggles since the Berliner Ensemble is strictly a German affair – no surtitles here – so brush up on the story first, and enjoy.