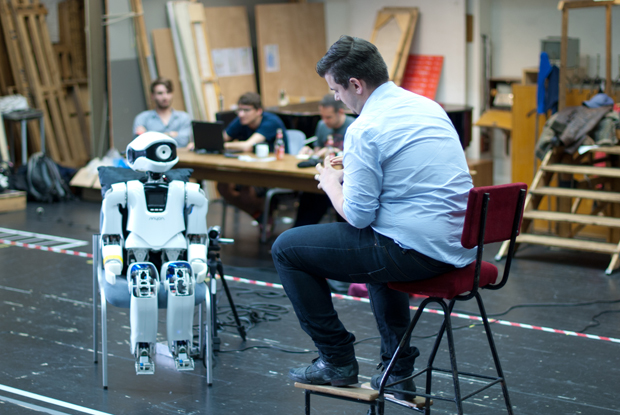 “We have one scene where Myon tries to conduct,” says Gob Squad member Sean Patten. “One day we tried that, and his arms overheated. And when he goes into overheat mode, he just shuts down. So his arms stopped. And when his arms stop, the whole orchestra stops.”

Such were the problems faced by Gob Squad in rehearsals for its newest project, My Square Lady. For the past two years, the lauded German-British performance collective has been crafting an opera starring a robot. He’s about the size of an eight-year-old, and his name is Myon. Gob Squad’s performances thrive on improvisation and the unpredictability of audience interaction. But robotics is uncharted territory for the group. So is opera.

As the name suggests, My Square Lady is a riff on My Fair Lady. But don’t expect a Cockney robot transforming into a society lady robot – instead, the musical serves as a jumping-off point to examine emotion and education. Gob Squad first became interested in artificial intelligence after watching a group of robots play football during the Lange Nacht der Wissenschaften in Berlin. “For ages, these robots kept missing the goal, and finally, after half an hour, the ball went in, and everyone was all, ‘Yes!’” says Patten. “It was fascinating to watch people watching robots, and to see how as soon as you put two legs, two arms and a head on a machine, people connect to it and empathise with it.”

Around the same time, Berlin’s Komische Oper approached Gob Squad about a potential collaboration. From there, all it took was a volunteer from Humboldt University’s Neurobotics Research Lab. Enter Myon, a humanoid robot in a sleek white shell. Myon is autonomous, meaning he reacts to activity – sound, light, movement – around him. This was a huge appeal for Gob Squad, which was more interested in exploring emotions than in teaching a machine to play the violin.

“Opera is filled with overdramatic emotions,” says Patten. “People are always dying and falling in love and betraying each other. So why don’t we take all those means of disposal and teach this one little robot about what it is to be human?” As research, Myon and his human helpers conducted interviews with Komische Oper employees, from singers to canteen staff. These were recorded and will factor into the final production.

For much of the show, 10 performers sit at a long table, Last Supper-style, discussing existential questions and giving Myon lessons in joy, passion and sorrow. Occasionally, elaborate sets slide onstage and people break into song – arias and classical tunes, yes, but also religious hymns and pop ditties. Patten takes a turn at Fame’s “I Sing The Body Electric”. With the orchestra and choir, My Square Lady features more than 100 people. And Myon? “He’s mostly just sitting there passively,” Patten says. “He’s taking stuff in. But in the absence of him doing much, you’re able to project all kinds of emotions onto him.”

Still, he adds: “Anyone who comes in expecting the all-singing, all-dancing Terminator is going to be very disappointed.”