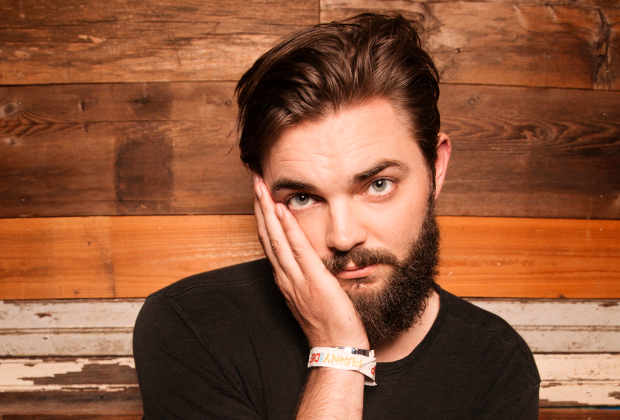 In Nick Thune’s Netflix special, Folk Hero, he looks more like a lost member of Mumford and Sons than a stand-up comic: often with horn-rimmed glasses, soothing voice, scruffy beard, guitar. The guitar is kind of a prop: Thune riffs on it while cracking one-liners and doing deadpan bits. It’s Demetri Martin’s observational cuteness with Zach Galifianakis’ sometimes aggressive absurdity.

For his American Babe tour, Thune puts away the guitar and turns to stories. There’s a kind of humility that emerges as Thune recounts, with the barest prodding, some horrible things he’s said to his wife. But temper this humility with Thune’s straight-faced self-aggrandizement: “My initial review of this material? It’s amazing.”

This sardonic dead-pan is so “take it or leave it” – that you might want to leave it. The line between someone pretending to be an asshole and an asshole is pretty thin. But we were still left laughing, giggling even. Nick Thune just wants everyone to like him. And it works.

Giggle along on Thursday, February 11, 7pm at Noize Fabrik.

Do you know as moments in your life are unfolding that they’ll end up as jokes?

Sometimes when they’re unfolding, that thought will cross my mind, and I’ll say, “No, this one’s too personal, there’s no way.” And then a month goes by and I decide to try to talk about it onstage. For me, my new hour is different than anything I’ve done before. It’s taken a while to figure it out. I went on Conan [O’Brien’s talk show], and I shared an experience of my wife giving birth and the interaction that I had with the doctor. And at the end of the story, without giving the joke away, I had Conan pull up a picture of my wife’s sonogram. And my wife and son were backstage: she knew I was talking about the situation but she didn’t know that I was going to show the picture. So afterwards, she was like, “Are you kidding me? You just showed a picture of my uterus on national television.” And that’s when it sunk in: Oh, yeah. Maybe I should be more careful and aware of the people around me.

My wife is now catching on. Recently something did happen to us where she said, “Absolutely, no way, you can never talk about this.” It was so frustrating because I actually was thinking, “I cannot wait to sit down and figure out how to tell people this story.” But I think it’s just a matter of time. She also gives it to me just as much as I give it to her, actually. I think she’s way funnier than I am. I just do this in public.

I just think of Margaret Cho’s mom as the ultimate saint.

I guess they have a very open relationship. It can be really great when it’s done right. But you look at people who expose their life and then go through divorces. You need to hold your personal life a little sacred and respect the people that you’re around. But my livelihood is based off of my experiences and to be able to share an experience in front of an audience frankly, in an embarrassing way, and show them that this kind of stuff happens to everybody.

Is it different being a dad?

I do wonder what his reaction will be, when he’s aware of what I do. At the end of a show I did recently on TV, I gave a shout-out to my two little nieces who are six, and I just thought, “Oh my god, they’re going to be so excited about this!” And I was telling my wife that my brother-in-law and sister never responded and wondering if they didn’t like it, and she was like, “Of course they didn’t like it. You didn’t ask their permission.” So it’s one of those things: “Oh God, errr, yeah, maybe I should think this out a little more.”

But also, the kids just have no idea what’s going on. I threw the first pitch out at a Seattle Mariner’s game – which came about because I harassed them on Twitter for two years – and my little nephew came who loves baseball and the Mariners, and he now thinks that I pitch for the Mariners. Which sucks for my brother, because now his son thinks that I’m the coolest person in his family and his dad is just nothing.

You mentioned making fun of yourself to show that everyone says and does stupid things. Is there something that you hope that the audience walks away with?

I just think it’s so pointless to go onstage and do these funny quips for an hour and not have anyone have gained anything. My agent and manager might say, “Nick! They gained laughter!” And yeah, they did. But now I think the biggest challenge is to have people gain more than that. It’s an amazing opportunity to have people’s attention for an hour. What do you do with that?

Have you performed in Berlin before?

You know, the last German audience I performed to was in Portland Oregon, actually. I was doing a tour of the West Coast and I got into Portland and my mom sent me a text that said “Hey, good news, my old friend from high school is going to go to your show, and she’s bringing 25 German tourists that she’s hosting.” The day of the show, to hear that – it’s not a fun text to get. So I called her and she said, “Yeah, there’s all these elderly German tourists that Sally is hosting, and they’re going to come to your show!” So the show starts and there are just two full rows of 70+ German tourists sitting in this rock club in Portland, which seemed like it would be horrible but it turned out great. I’m not sure they understood all of what I said, but hey. Afterwards one of them was talking to me and someone else was translating, and he said, “I couldn’t understand, but I could tell by the way that you were talking that you’re very funny.” So let’s put that down as a promotional quote for this show.