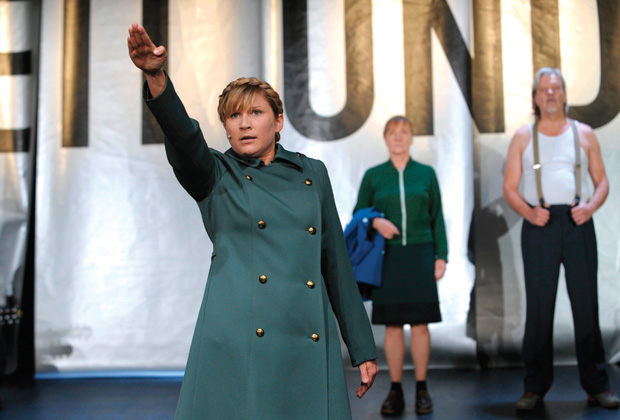 For over half a century, the work of German writer Hans Fallada languished in relative obscurity outside his native country after his untimely death in 1947. But his last and most famous work has recently been rediscovered by the international literary community, garnering critical recognition and acclaim worldwide.

Jeder stirbt für sich allein (Every Man Dies Alone) is an evocative portrayal of a working-class couple’s passive struggle against the brutal inhumanity of the Third Reich through the printing of political postcards. Under the direction of Hanau native Jorinde Dröse, the Maxim Gorki Theater is presenting the first contemporary stage adaptation of Fallada’s work.

Exberliner sat down to talk to the director about her interpretation of what Holocaust survivor Primo Levi called “the greatest book about German resistance to the Nazis.”

How did you go about adapting Fallada’s book for the stage?

We had to make a clear decision about what we wanted to show. I tried to go about it in a superlative way: I asked myself which parts resonate with me the most emotionally. The book is a prism; it shows a huge cross-section of society. That is a quality of the book I felt we had to keep.

Even so, I wanted to tell the story of the Quangel family. I thought the final part of the book, the part where the Quangels are waiting for their inevitable execution in prison, is very long and depressing, so we decided to leave this final part out.

Is this ultimately a story about death? Resistance to oppression? What are the main themes for you?

To me, the main question is one of resistance. But it’s also a story about life and death… and love. I think Fallada’s thesis that only a personal decision can drive you to radical action is very significant.

The Quangels decide to start resisting because their son dies, and with the decision to resist, their love grows. I think that’s a very good thought, that a personal decision has to motivate such opposition.

Otto Quangel is not your typical protagonist. What sets him apart from other dramatic heroes?

The special thing about Fallada is that ultimately he tells a story about people you can identify with. There are no heroes in the book. The characters, they are like you and me. They want something to eat, a place to sleep, a warm bed. Yet the political system they live under forces them to fight for these rights, rights that are essentially inherent.

The Quangels may only write postcards, but in an oppressive, terroristic system, that is a huge gesture. That the form of resistance is writing is even more significant. It is a silent protest, a still protest. And it’s permanent. It’s comparable to writing something on the web today. You write it and leave it somewhere: eventually someone else will read it. The tragedy in the book is that only 18 of the postcards are read. Yet as Otto Quangel says, it doesn’t matter in the end. Even one is enough.

What is the relevance of the story today?

This is a story of how ordinary people can react to a system of oppression. How can you live in a system like this? How can you reconcile your political and personal interests? It’s the system versus the individual, and you have to make a decision to be a Mitläufer [follower] or to go the way of radical opposition.

Today we live in a free society here in Germany. You can say anything you want, you can make your own decisions… but what is similar is that everyone has to find a way to articulate themselves, politically speaking. In the Third Reich it was very difficult, but the Quangels found a way with their postcards.

It’s our responsibility to find a way to articulate ourselves in our time. I wanted the audience to leave with these questions. What can I do? How radical would I have been at that time?

Why did you opt for an ahistorical staging: no swastikas, no SS uniforms?

We wanted to look for signs that are modern. We showed the Nazis as we did, because I think it’s easy to use historical signifiers, but we wanted the people to be able to think about it apart from that as well. A purely historical setting makes it easier to distance yourself from what is happening.

How do you find the Berlin theatre world after working in Hamburg and Basel?

In Berlin you have to be more radical in your work. I wouldn’t say it’s the centre of German theatre. There are different acting styles in Munich, or Hamburg, or Basel, and I think the main difference is that the audience in other cities loves you more. They seem to have a bigger interest.

I think there is a certain arrogance in Berlin. A theatre in Buków or Hamburg is not worse. Here in Berlin it’s a challenge to direct. It leads you to make radical changes.

I have often heard from younger Germans that they are fed up with talking about the Third Reich. Where do you draw the line between healthy, necessary reflection and obsessive guilt?

When I was younger, I was fed up with the guilt. I hadn’t lived in those times, it wasn’t my fault and I didn’t want to talk about it. But this view changed. Now I don’t see it as guilt but rather as the question of how I would have reacted, and this question makes my life richer.

I think a lot of people at that time simply shut their doors to what was happening and that is not unlike how people shut their doors today. They don’t want to talk about the economic crisis or the nuclear catastrophe or whatever else. That is comparable; reflection makes sense as an impetus to confront problems directly.