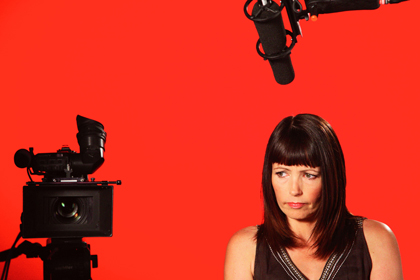 A lone man steps out from behind the curtain holding a piece of cardboard that says ‘Applause’ on one side and ‘Loud laughter’ on the other. This gimmick works, he even manages to get some applause when he says ‘Chinese people are evil’, just by holding up the sign. He then throws it away and says the rest of the evening is nothing like that.

And it isn’t. The curtain opens and the audience suddenly becomes the studio audience for a television show, a cheesy teleshopping programme in which they are not selling budget priced goods but experiences.

Entitled This Unfortunate Thing Between Us, the live-broadcast as theatre features a number of German actors from around Berlin, live music from Gruff Rhys & Niwl, and is masterminded by artist and lover of all things dirty television Phil Collins.

According to the production team’s “poll”, the top three experiences Germans, and those in German-speaking Switzerland, wanted were: ‘A Stasi-style interrogation’, ‘Live enactment of a sex fantasy’ and ‘Telling your family you hate them on your death bed’.

Each experience is assigned its own number: the ladies in the call centre appear, and then the hosts and ‘specialists’ demonstrate each experience, rotating the stage each time to reveal a new scene.

The result was side achingly funny, but also unsettling: was this for real?

It was, apparently, and it’s not over. Real people phoned in and three real people will be live on stage and TV tonight living out their chosen experience, all for the bargain price of €9.99.

Although the feeling of incredulity still hangs over me and most of the audience, I’m sure they’d all agree it doesn’t matter if the people having sex, live on stage, are real or just ‘real’.

(Although Phil Collins – not to be confused with the singer of the same – is British, the show is predominantly in German.)

This Unfortunate Thing Between Us will be “broadcast” one more time on Sep 16 at 22:00.