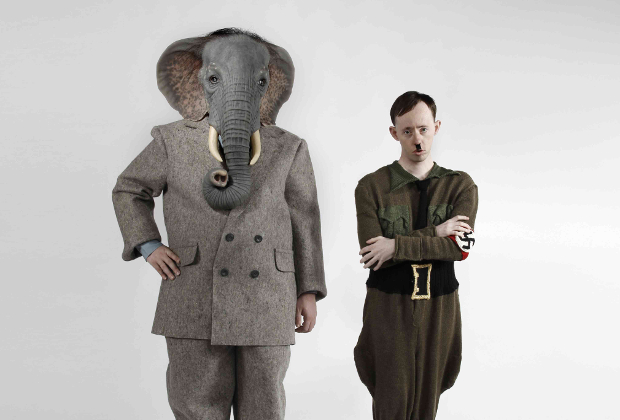 Bruce Gladwin, the artistic director of Australia’s visionary Back to Back Theatre ensemble, on their award-winning Ganesh Versus the Third Reich.

Working outside the Australian state theatre system, Back to Back has been making award-winning performances for over two decades with a permanent ensemble of actors perceived to have intellectual disabilities. And while the actors’ handicaps may initially intrigue audiences, it’s the company’s innovative and socially critical performances that have garnered them an international fan base – and critical acclaim.

Since Gladwin took over the company in 1999, the ensemble began expanding its horizons beyond the Southern Hemisphere, touring throughout Europe and North America.

Back in Berlin for the second time (Food Court was performed at HAU in 2011), the company tackles the swastika and the role of artistic freedom in society in Ganesh.

Where did the idea for this devised story originate?

Rita, one of the actors in the ensemble, was obsessed with Ganesh. We were working on using drawing in performance, and she was just constantly drawing Ganesh. And at the same time we were exploring changing the actors’ vocals by pitch-shifting their voices down a couple of octaves to see how it affected them physically. And in one of those performances, Sonja created a neo-Nazi figure with this very deep voice, and so we had these two distinct subject matters.

The show is a product of Google in many ways – we Googled those two subjects and found a number of websites dedicated to theories about the appropriation of the swastika by the Nazis. So we were interested in the idea of creating a hero’s journey, like those kinds of epic archetypal stories, and developing the idea that Ganesh would travel to Nazi Germany to reclaim the swastika; to save the universe.

How did the meta-narrative of the actors and the director character come into the picture?

It’s a play within a play: the first narrative is the epic hero’s journey of Ganesh travelling to Nazi Germany, and the second narrative is the actors and the director in a moral, ethical dilemma about the presentation of that first narrative – around issues like who has the right to represent the Holocaust. Who has the right to play a Jew when they’re not Jewish? Can we appropriate Indian deities as a small company from Geelong, Australia?

Initially when we conceived the narrative line of Ganesh travelling to Nazi Germany, we actually sat on it for a couple of years because we thought, “Oh, that’s a great story but we don’t have the right to make it.” And then there was a kind of turning point for us when the thought that we can’t make it became interesting to explore. That, in a way, gave us license to make it, to understand our own relationship to those issues.

So how much of you, Bruce Gladwin, made it into the director character?

Quite a bit. The work is a fictionalised autobiography of us in the process of making a work. And there are experiences that the director has on stage that I have on a weekly basis, but you know, I don’t want the truth to get in the way of a good story. There are definitely elements that are very similar to my relationship with the actors, but then also it’s made for a piece of intense theatre, so there’s a kind of condensation: 10 or 15 years of experience into one hour and 45 minutes.

Underneath these two narratives, are there themes that emerge?

Ultimately the piece is about power. One narrative looks at this point in history of the rise of the National Socialist Party and annexing of countries throughout Europe and then we contrast that with a very domestic relationship between a director and a group of actors who are all perceived to have intellectual disabilities. We’re interested in the more subtle relationships that are a part of all our lives, like relationships between a parent and a child, a director and an actor, a psychologist and a client or a priest and a congregation member. They’re very subtle relationships of power, and we wanted to make something that explored that.

It’s really hard to present something in a theatre without remembering that kind of history. As you say, there’s this whole phenomena of the freak show and the display and presentation of people of difference, whether it’s cultural or physical or intellectual.

I grew up in a family where my parents always told me to divert my eyes from anyone that was disabled when I was walking down the street. So the first time I saw a Back to Back show as an audience member, I was in this unusual situation where I was kind of forced to look at people that I’d always been told were really rude to look at; and I paid $25 for the privilege of doing it.

I think my own level of experience and comfort with the notion of disabilities evolved over time, but I have to say it’s not front and centre in my working relationship with the actors. I’m not there because of politics, I’m not there because of a kind of benevolent action, I’m there because I think the actors are amazing artists. In collaboration with them, I can progress and develop my investigation of theatre in directions that are quite unachievable in other organizations. I’d much rather be working with Back to Back than the state theatre companies in Australia, for example.

How has your understanding of disability changed over the course of working with the company?

We use the term “perceived to have an intellectual disability” because not all of the actors in the company perceive themselves to have a disability. Some of them are highly politicised and are strong advocates for people with disabilities, and others have never had the word “disability” come out of their mouths. I guess I’ve learned over the years that it’s dangerous to assemble a group of people into one category when there’s so much difference in terms of their own position to that categorisation.

For audiences and for myself and other collaborators, disability [in the company] sits out front and centre; it’s just the phenomenon of how disability exists in our society. But I think the work is the layer underneath the tagline of disability, and that’s inability. It’s almost like underneath the disability, the actor’s inability remains intact. And there’s this idea that what links all of us is our common inability.

Have you run into any controversy with Ganesh thus far?

When the show first premiered in Melbourne, there was a protest that originated from a right-wing Hindu group to try to close the show. The concern was that we were going to denigrate Ganesh: it was based on fear but also on a sense of needing to control the use of symbols, which is ironically what a large part of the content of the show is about. When we first took the work to Europe, we toured Vienna and were interested to see people’s reactions, given the loaded material.

But I felt like audiences appreciated that there was the representation of the Holocaust and issues around the representation of Hitler, etc., onstage in a way that was respectful but kind of playful at the same time. In Q&As in Vienna, people said, “Are you going to take the show to Germany? It would be really interesting to see how the Germans would react to this.”