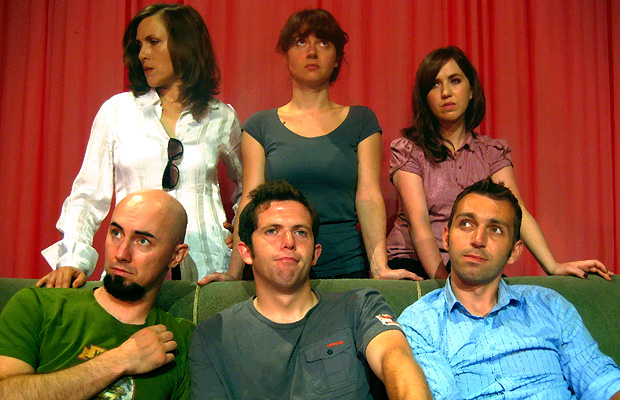 “Words have a tendency of getting in the way,” says insecure estate manager Stewart (Brian Loughnane) in Private Fears in Public Places, as he tries – in an incredibly indirect way – to come clean with his secretary Charlotte (Sabrina Ellenberger). And as so often happens, the prophecy is more or less self-fulfilling.

There is even more truth to British playwright Alan Ayckbourn’s words now, six years after the play’s London premiere: at a time when Skype, Google chat and mobile phones make human contact almost superfluous, and divorce seems to be a more common solution to marital controversy than therapy.

Fear of words getting in the way – one could call it a fear of intimacy – is the standout emotion in Werner Gerber’s staging of Private Fears in Public Places at English Theatre Berlin: the intertwining of six tragic destinies into four bizarre stories. It is deservedly so, as this mother of all private terrors also covers the secondary fears of misunderstanding, humiliation, embarrassment and, most importantly, loneliness. In conversation with bartender Ambrose (Lee Stripe) at a sleazy hotel bar, former army general Dan’s (Kevin McKinnon) line “It’s rather personal…” is the warm-up to a spray of details about his all-but-dead relationship with social-climbing middle-class snob Nicola (Lisa Meilen).

The idea of weaving together stories and destinies in 54 small scenes at first seems more suitable for the big screen (Babel and Closer, for example). But it actually works well here, and even adds to the intensity on ETB’s conveniently small stage. The production features some interesting performances, but the countless differences between Dan and Nicola make it hard to imagine how they ended up together in the first place. Dan’s alluded-to alcoholism seems to imply the existence of war trauma, but this doesn’t add the necessary credibility to the relationship.

That said, Private Fears in Public Places is a charming play loaded with punchy one-liners and awkward moments (both for the characters and the viewers), and this production picks up its fair share of well-deserved laughs – often out of empathy, like when the self-effacing Imogen (April Small) gets stood up by yet another blind date. With this satirical (and sometimes close-to-cliché) take on middle-class city life, Ayckbourn manages to skewer not only his characters, but the audience as well.