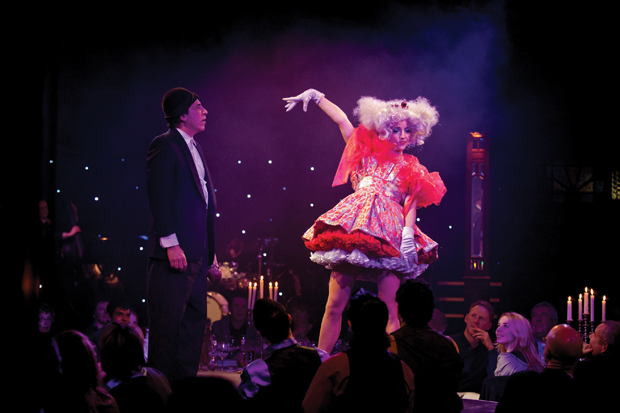 American-born entertainer Peter Shub is one of the fixtures of the German Varieté world. These days he’s bringing his hilarity to a new domain: dinner theatre.

With his insolent invisible dog, magic that just won’t work and a coat with a mind of its own, Shub’s physical comedy is masterful in its simplicity and touching in its honesty.

After performing throughout Europe, working in the Roncalli Circus and garnering prizes for his one-man show, Nice Night for an Evening, he’s now charming audiences six nights a week at the Palazzo dinner theatre in the Spiegelpalast next to Hauptbahnhof.

How has the dinner theatre environment affected your work?

In the circus it was popcorn, and now it’s five courses. I’m in competition with the food a little bit. A lot of the time you want the audience to be looking at you on stage, and they’re looking down at their plates. So I’ve got to do something, make noises – I don’t want to lose their focus.

It’s harder than normal theatre, where people focus more on the show and sit closer together. Comedy needs company, people sitting elbow to elbow with each other. Then laughter is more infectious. Things that are directed to the public work here. If someone sneezes, I react to it as if it’s landed on me. Or if someone walks by, I say: “Welcome back. Did you wash your hands?”

You’ve been here nearly 25 years, but you still speak English on stage. Why?

My German is just terrible. It would be better if I did it in German, or mostly German and some English. And I always say I’m going to do it, but I’m so lazy. I wanted to learn it – I just didn’t want to go to school for it.

Didn’t immigration ever give you trouble about your language skills?

When I went in to apply for permanent residency, they said: “We’d give it to you, because you’ve been here many years, but your German’s terrible. So go learn some German and come back in two months.” So I did, I learned enough to be friendly, and they gave it to me.

Do you ever wish that you played another part in the circus and weren’t just the funny guy?

I’m a frustrated musician. I’d like to be in the band, playing the guitar. When I move people in the audience, they move back and forth in laughter. Musicians move them on a vertical line and get people to dance.

Are you ever criticised for working in entertainment rather than ‘serious’ theatre?

Do you prefer the song “Tears of a Clown” or “Send in the Clowns”?

“Send in the Clowns”. With “Tears of a Clown” there’s this cliché of clowns being sad people. To me “Send in the Clowns” says we’re given the chance to be heroes. Send in the clowns when there’s a catastrophe, someone’s fallen off the high wire and you need to revive the public.

You’ve certainly seen tragedy, especially with the accidental death of your four-year-old son.

Even though I have reasons to be taking drugs, etc, I’m not. I’m looking for joy. I’m proof that even if shit happens, life goes on. It can be summed up in those three words. So if you’ve had a catastrophe in your life, you should come to this show and see that it’s still possible to enjoy your life.