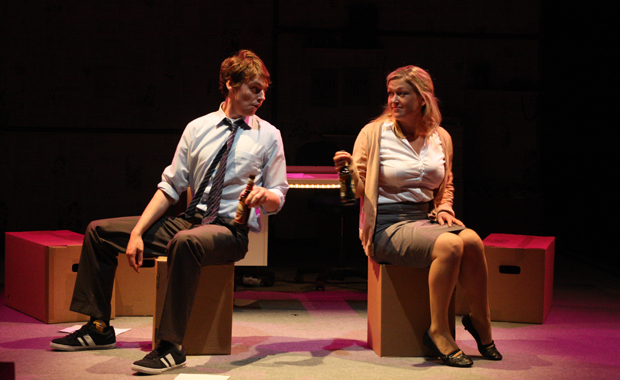 Contrary to the belief of many Twilight fans, love and romance are rarely lifelong phenomena. Humans aren’t penguins or swans, and monogamy is more the exception than the rule. So it’s not surprising that memories of previous romantic liaisons can pop up in the first weeks of a new couple’s relationship.

What is surprising is that clever writing and well-timed direction saves this clichéd material in My Romantic History by D.C. Jackson, in a new production directed by Jude Christian at the English Theatre Berlin, from falling flat.

The plot and structure are fairly simple: Tom (Chris Davis) starts a new job, meets Amy at the office (Lorna Jones) and falls into bed with her. The performers then portray not only the couple’s first weeks, but also various scenes from their pasts, with the skillful help of the very capable Pip Swallow in multiple roles. Neither of them really loves the other, but keep “dating” out of inertia.

So yes, it’s the same sex-without-love theme so often explored in contemporary culture, which keeps the 2010 play from feeling fresh and innovative. At the same time, the specificity of the writing and detailed characters flesh out what could easily become two dimensional stereotypes.

Characters are also shown in two ways: as they address the audience directly, and as they appear in the other character’s memory. In one key moment (involving a tattoo), we’re all reminded that people aren’t always what they seem, and memory has a strange way of manhandling the truth.

Be warned: the Scottish dialect can sometimes be difficult to understand (I completely missed a couple of sentences, but, granted, I’m American). The performers are charming, but sometimes rough around the edges, which makes also some of the character switches difficult to comprehend.

The lighting (Katri Kuusimäki) helps guide the audience through the narrative, and in a pleasant switch from most productions on the ETB’s main stage, the audience is seated on three sides of the set (masterfully designed by Laurin Kelsey). All things considered, this fast-paced production makes for a mostly pleasant and sometimes thought-provoking evening of entertainment.