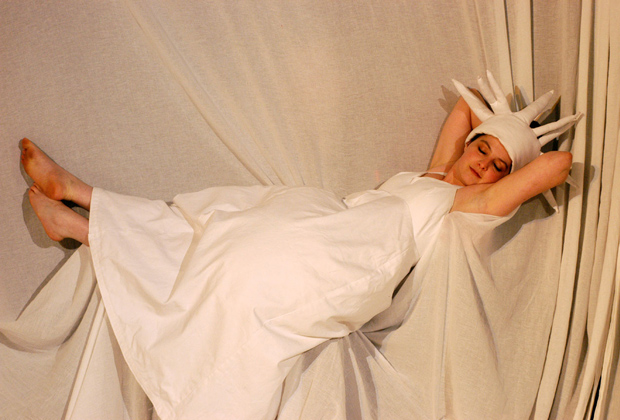 There’s nothing quite like sitting in an audience of six- and seven-year-olds. Forget conservative applause and polite appreciation – the only rules are that there are no rules. Raucous laughter, shrieks of encouragement to the actors, and chatting with your neighbour if you get bored are the norm. The upshot is an unforgiving and honest atmosphere.

Marc Lowitz and Peter Markhoff have adapted Jutta Bauer’s classic tale of a queen who invites colours into her black-and-white kingdom, and whose subsequent quarrels end up turning the world grey. But the story is not the star here: rather the interplay between the actors and the audience, and the simple and effective use of light and colour to create illusions, tiny moments of magic.

The Queen (Marcella Ruscigno) and her court painter (Peter Markhoff) ham it up for their young charges. There’s plenty of interactions with the young crowd, such as when the Queen is pursued around the stage by an errant red dot, complete with classic pantomime calls of “IT’S BEHIND YOU!”

Markhoff draws directly onto transparencies with coloured pens, which are then beamed with an overhead projector onto three plain white cloth backdrops. It gives the colours a real sense of character and playfulness, which, along with big bold washes of lighting, transform the simple set into a blank canvas for the imagination. Director Marc Lowitz encourages the actors to play with the cloth, and you can feel the audience’s warm response when the Queen wraps herself up in it.

Oh, and language – who needs it? Often the conversations between the Queen and the colours (Markhoff) are reduced to “Da-da-da-da?” or “Ra-ta ta-ta!”. We shouldn’t be too surprised – who knows how colours talk, after all – and judging by the reactions of the crowd, they got every non-word. And inserted a few of their own.