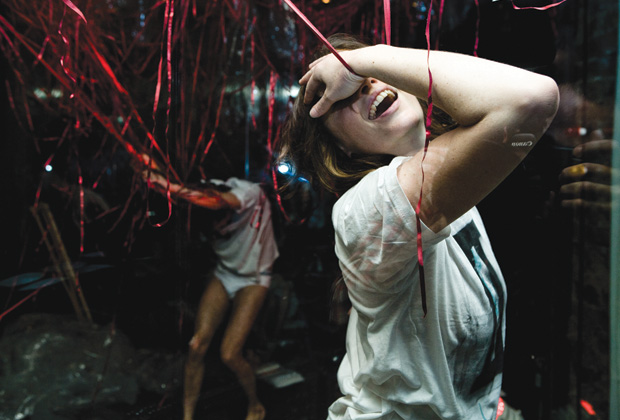 Shannon Murphy, director of the experiential theatre collective Sands through the Hourglass, discusses the group’s in-your-face performance style, on display this month at Schaubühne’s F.I.N.D. festival.

The first Australian theatre group to be invited to the Schaubühne’s Festival of International New Drama, Sands through the Hourglass – featuring performers Simon Corfield and Sarah Enright, along with Murphy and a sound designer – devise one-of-a-kind, partially improvised performances that are unique to a given location.

Their piece The One-Eyed Man is King, created for Saal C at the Charlottenburg theatre, will premiere at the end of the festival.

What can we expect from Sands?

The work is very visceral, humorous and confronting, and hopefully moving as well. The work came from a rebellion against naturalism in theatre and celebrating the risk element that live performance offers. In our last piece, the audience often had to move around to get out of the way of wheelchairs or liquids or vaginas, or whatever else was coming at them.

It also involved a performer offering meat to the audience on a fork… How far can you take it?

Yeah, that was a pig’s heart. Our work is often about asking that question, “How far can you go?” We have had urination and things on stage that might have slightly gotten onto the audience, but the work isn’t about the shock factor by any means. The audience may get a bit splattered, but we tend to find that they really are quite excited about that rather than deterred in any way.

Excited about having urine splattered on them?

Often when something like that happens, people just don’t believe that it could be real. So they assume that we’ve done some kind of theatrical trick. So people weren’t even really aware actually. Until after.

What themes are you planning to explore in the piece for F.I.N.D.?

Society and one’s role in it, and delving into the shift one feels if given a reason to feel superior because of uniqueness, if one has something the others do not, that’s why it’s called The One-Eyed Man Is King. The idea of feeling trapped by either your body or your personality, or others’ perceptions of you, when you know that deep down you have an immense amount of creativity or intelligence.

You’re likely to find quite a bit of genre-bending performance here, from transplant Australians as well.

That’s one of the reasons I didn’t come to Berlin for a long time. Because everybody in the theatre scene in Australia was always banging on and on about how fabulous Berlin is, and I just felt like it was the trendy thing to do. I avoided it because I didn’t want to be one of those people talking about how great the scene was in Berlin, and of course…now I am.