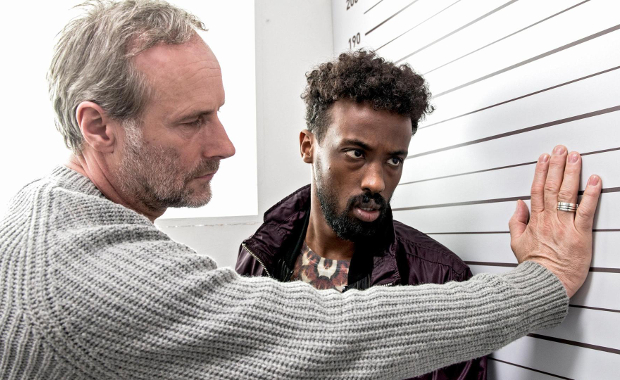 There’s an exercise in directing school where you do the scenes without words to see if they really work. German serial Tatort fails such a test. Miserably. Broadcast with no sound, the episode we saw featured a “Nafri” suspect wrongly taken into custody, a refugee labelling everything in his host’s house with post-its in German, his wife doing some independent crime-solving around town and being savagely beaten by a roaming group of lads. “I just love how this show’s so topical,” quipped one comedian with mock-naive admiration.

Brothers Josh and Noah Telson of Comedy Café came up with the show as a kind of revenge on all the German dubbing of English media. But the effect of Tatort auf Englisch – in which four performers and a keyboardist perform all voices, music, and sound effects – is more like Mystery Science Theater 3000’s wry running commentary on B movies than anything else. It’s pretty gentle, though: the show is as popular with German Tatort fans as it is with improv-loving expats who have never seen an episode.

An hour and a half is a long time to improvise, so the show is bound to be uneven (once you set up a running Electric Light Orchestra joke, you better have a lot of ELO jokes in your pocket). But overall, it’s a really fun time. And they have Vagabund beer on tap! And entry is by donation! The Telson brothers laugh that no matter how bad their jokes are, whatever they come up with will certainly be more entertaining than the actual show. They’re definitely right about that.