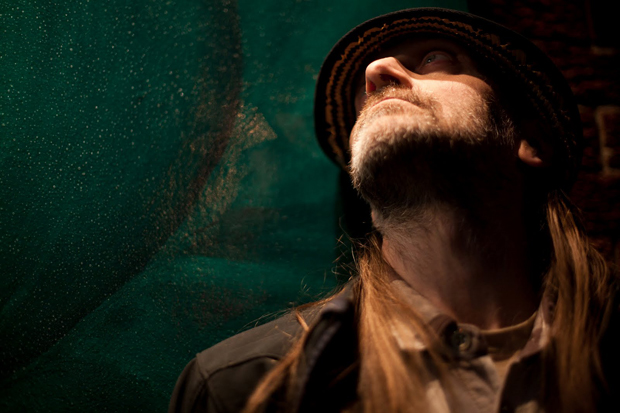 When people leave a performance before the end, it’s usually due to one of three causes: the work is so challenging that some people are offended; the work is just terrible; or the ice cream truck has just arrived. Unfortunately in the case of Snakeskins (a fake solo), the cause appears to be the second: as a performance, it simply doesn’t work.

And at the risk of sounding like a scolding parent, the piece’s failure is more disappointing than anything else. Its elements are individually beautiful and intriguing: atmospheric music (Hahn Rowe) collaged live, choreographer Benoit Lachambre’s animal charisma in an aging dancer’s body, a set piece composed of illuminated ropes strung from the ceiling and a movable prop constructed as a puzzle. The problem is that the puzzle assembled from these elements not only fails to create a comprehensible picture, the pieces don’t match at all.

The work begins outside, with a dialogue between the puzzle board, Lachambre and his assistant (Daniele Albanese). Pieces are moved, poses are stuck, and at some point we’re all ready to go inside the theatre. My favourite moment of the piece came in this transition as Lachambre adjusted his costume (read: picked his wedgie). The program text promises a search for authentic expression – which is the current contemporary dance buzz word – but that was really the only moment that didn’t seem artificial.

Inside the theatre the piece progresses through a series of movement pieces that seem to be loosely connected through a character that walks pigeon-toed on the outside of his feet, three masks that will say “Mexican wrestler” to some and “bondage gimp” to others, and switches in power dynamic between the three performers and set pieces. Lachambre performs some rather impressive feats of physical strength and flexibility involving bondage gear, and then makes references to religious rituals, video games, slapstick humor and the absurdist tradition throughout the rest of the work.

The piece also comments on dance itself, with very explicit references to transitions and dancers getting “personal”, but this commentary feels tired, incoherent and harmless inside of a performance that clearly caters to the dance world. The three performers’ evident talent is wasted on such superficial and poorly orchestrated material.

If you do decide to go to the piece’s final performance tonight, I’m tempted to advise you to stay to the end, because there is a still superficial, but beautiful piece of rave-like eye candy created through the play of light on the ropes. And there’s nothing quite like watching people negotiate the socially-unacceptable decision to leave a performance, while a man wearing a mask mutters on stage.