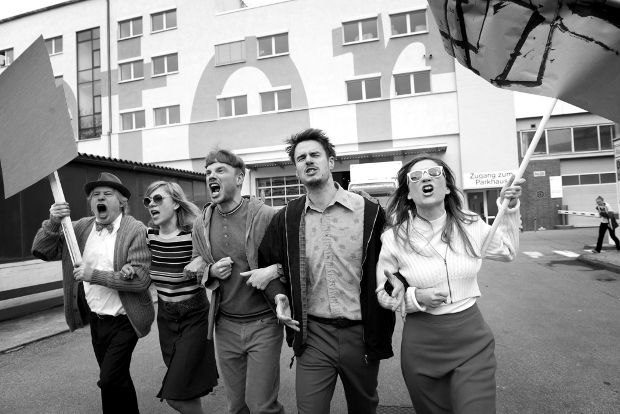 New Schaubühne production The Invention of the Red Army Faction by a Manic-Depressive Teenager in the Summer of 1969 is as long and unwieldly as its title.

“I have the feeling we should start over from the beginning,” intones the main character at the end of Armin Petras’ Frak Witzel adaptation, and from the audience comes an audible groan. The proclamation comes just under two hours in and about as many false endings as the last Lord of the Rings. Plus time in the play is so back-and-forward, moving between overviews of the political context of post-war West Germany and personal scenes of life in a small town near Wiesbaden. What is the beginning, really? When the play starts with a getaway scene and moves back to claustrophobic Catholic village life and then forward again to hostage situations and back again to pancakes with an ill mother and distant father?

Scenes within both the political overview and personal memoir stand bigout. The actors’ scramble to create iconic tableaux from the late 1960s has the freshness of improv: cutting between John and Yoko’s bed-in to the 1968 Black Power salute at the Olympics to Pete Townshend smashing his guitar at Woodstock. A priest pulling wurst after wurst out of his pocket during confession is brilliant, as is the first-love recognition that it was your best friend you wanted, all along. But the shuttling between the two modes shuts down the play’s momentum. The original novel is a sprawling 800+ pages: the jury that awarded it last year’s German Book Prize called it, “a hybrid compendium of pop, politics and paranoia”.

Petras’ production is a hybrid compendium indeed. It’s also an unsettling contrast between the mess of adolescence and the Schaubühne’s pristine professionalism. The actors can throw paint all they want, but this is artful, expensive, and near perfectly- executed Staatstheater. The house band, Stuttgart’s Die Nerven, is a welcome live-wire, but they’re playing to department store mannequins. Jule Böwe, playing one of the more magnetic incarnations of the 13-year-old protagonist spread across the five actors, complains that she would like to “blow herself out of this frozen time”. Us too.

THE INVENTION OF THE RED ARMY FACTION… May 8 (English surtitles), May 29, 20:00 | Schaubühne, Kurfürstendamm 153, Charlottenburg, U-Bhf Adenauerplatz