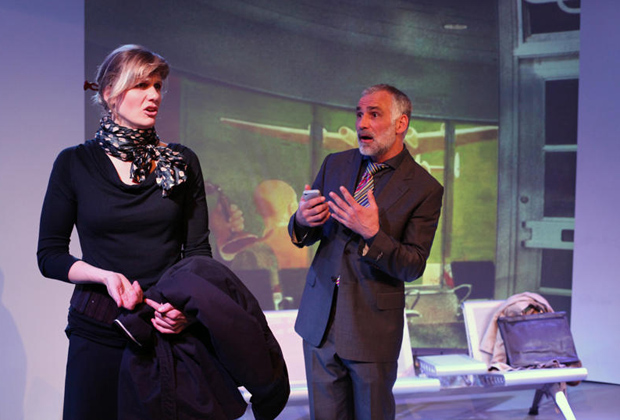 Airports are theatrical places. You’re usually so wrapped up in your own ordeal of pre-flight/post-landing stress that the activities of others go unnoticed. It seems as if everyone in an airport is on the big stage, yet no one is watching. But what’s really going on with the rambunctious, quirky couple behind you, the mysterious, quiet Middle Eastern man reading the paper beside you, the family across from you or even the very pilot flying your plane? What are the stories behind these faces?

Director Ali von Stein’s latest work, a series of six mini-plays, cleverly taps into our deepest fears, insecurities and regrets by working them through a stage setting and grouping the multilateral skits under the production name, Terminal Connections – The Airport Plays.

The 240 sq. metre studio warps into a terminal setting for this play and you’ll already begin to feel like an agitated flyer at the door: rows of neatly placed shoes line the walls as the ticket collector cheerfully signals everyone to remove their foot gear.

A catchy tune blasts from the studio’s surround sound as the entire cast maneuver their bodies through the audience, pouring out from every nook and cranny possible. Single filing their way to the center stage, the cast collectively burst out into a musical performance – which is somewhat hard to interpret over the loud music – and the plays take their course around the central narrative of the pilot. Various moods and time settings are toned by the stage lights while the background projections of international terminals whisk the audience into the play.

Overall, the actors, most hailing from English-speaking countries, gave engaging performances. Because there was minimal use of props and costumes, their characters really came through, making the experience satirical and entertaining. The stories hit home, but at times seem to drag on long after the moral of the story has been presented. The bizarre events in the final skit are a bit unfitting to the spectacle of it all, yet just as easily could have been strategically seeded as an abstract puzzler.

This theatrical experience of the I-am might just help you come to terms with your flight anxiety.

Terminal Connection I Play2c Studio, May 25-29