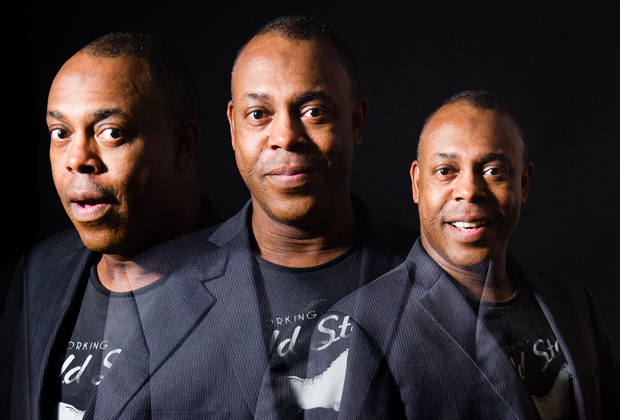 After finding success in Police  Academy, Spaceballs and other  1980s cult comedies, Michael Winslow  carved a niche for himself in Hol lywood as the “man of 10,000  voices”. Turning to live performance, Winslow has sold out  shows at the Edinburgh Fringe  Festival over the past two years,  reviving an old-school style of sound-effects beatboxing mixed with comedy. And printing an interview with him only captures half the story. To get the full effect check the link to the left for the MP3.

What can we expect from this show?

My job is to help people forget about their rent for an hour. So leave your problems at the door and leave all the bills and troubles outside, come in and have a gooood time. I promise there will be no [whistles an owl noise]. I decided to get the kitchen sink and just throw everything in there. We’ll cover everything from Armstrong to Zeppelin.

I’ve heard so much about the Hendrix impression…

The letter H will be covered too. And it sounds to me like these big concert halls that play Mozart and Beethoven. [Makes  violin noise].

Does it feel weird to be put in a classical music environment?

No, I can lay classical.

As we just heard! But there’s this idea that something is either entertainment or art.

What I do is ‘artertainment’.

Care to define that further?

We can let them figure that out. I’m what they call a voicestrementalist, so what I do is artertainment. The voices drive all the animals in my neighbourhood crazy. If you do the sound of a dog in another room, it’ll drive him crazy. He’ll sniff every inch of that room to find that other dog. It’s good for 20 minutes.

So do you have a dog?

We have a guest dog. [Makes barking sounds] “Is there a dog in here? It can’t be you, you’ve got two legs!” It’s the most exciting thing that’s going to happen to the dog all week.

When did you first discover you could make sounds like this?

I always did this. The other kids had their own toys, I had my toys but mine were audio. I didn’t have a lot of friends, so I used the toys as my friends.

Yes, it’s the first game where the entire thing is human sound. Every explosion, laser sound, horse hoof, every helicopter, every sound is all human. I think I did 500 tracks or something.

Have you had the experience of hearing the app when someone walks by you in LA?

[Sings in a high-pitched voice] Nobody walks in LA! It’s all [car noises] beeeep beeeeeeeep! “Waa, get outta the way!”

It’s scary. It’s scary hearing your own voices. People don’t look where they’re going when they’re using a smartphone. They often run into each other a lot!

Can you give us an example of a new sound you made up for the game?

They have these flying helicopter boats, which was sooo strange. Plus we had to do the wizard – he’s only one-third of a metre tall, he has a jetpack and a beard. I had to come up with a jetpack noise and his voice.

I may have to get a smartphone now.

I have a dumb phone, too.

It costs a lot of money to use, so I keep it off all the time. Iphone me phone you phone. They have butt phones now. I had a phone in my back pocket and it texted someone else’s butt. And they answered. That’s scary. Butt texting is the new thing now. The right cheek is the creative one.

Catch Michael at the Udk Konzertsaal Hardenbergstraße on November 27 20:00 and check out the mental sounds of the man himself with the MP3 of this interview.