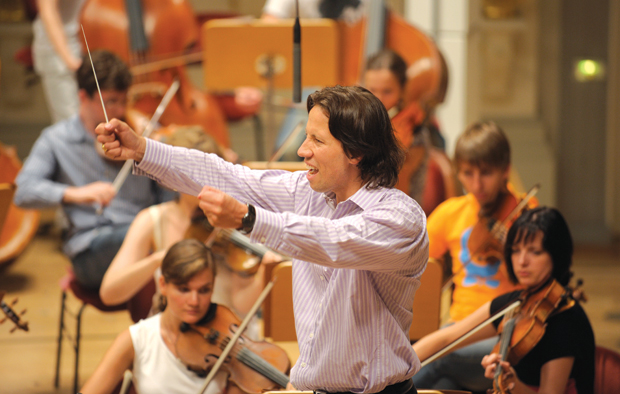 Estonian-American conductor Kristjan Järvi is the force behind the Baltic Youth Philharmonic (BYP), which returns to Berlin this summer for its second appearance at the Young Euro Classic (YEC).

Newly appointed music director of the Leipzig Radio Symphony Orchestra, Järvi is the fiery, charismatic face of classical music in Eastern Europe. When he’s not guest conducting top-rated orchestras, he’s working with BYP and Absolute Ensemble, both of which he also founded, or commissioning new works.

The 40-year-old has brought together the hundred-strong BYP every summer since 2008 to create a platform for the musicians of tomorrow.

There’s kind of a national characteristic that we have to bring into playing. I’m a very strong believer that when you play something from a country, you must try to get the essence of the spirit of the music. Like how a Finn would play [Romantic composer Jean] Sibelius. We have to not only play the notes, but also actually become that country’s orchestra for that piece.

Isn’t it difficult for the musicians to change like that?

Of course! This challenge is where they sharpen their skills as performing artists and constantly shift gears – it’s almost like boot camp!

Yes. Last year we initiated a composer’s programme during the academy period of the BYP. Gelgotas came to several of the rehearsals and then said, “Kristjan, can I have half an hour of your time?” He then did a performance of one of his pieces. And it was fantastic original music – I was completely blown away! We need to support that kind of musical entrepreneurism. Not only because they have incredible original concepts and fantastic music, but also because they have the willingness and passionate energy to go out and be noticed.

Last summer I saw you and BYP, and there was so much energy! Is it something that you give to the orchestra or do you get it from them?

I give them a lot, but if I just give my energy into a black hole, it sucks me dry. But if the energy comes back, then it starts going back and forth; it becomes this synergy. When that happens… whoa! Once you start communicating on this much higher level than words, then you start getting an unbelievable excitement in the audience, because they start to see that this is actually a higher form of communication – of emotions, spirituality and love – and only music can do this.

Are the youth orchestras as good as the professional orchestras?

I have yet to conduct a youth orchestra that plays worse than a professional orchestra. Usually it’s the other way around. These are people who are studying and practising their instruments all the time. They might not be experienced, but they are definitely in top shape, and they’re learning every day. You also have people who don’t play together all the time, so they are much more eager to do their best – it’s do or die! People are training for years and years and they have one chance. In fact, the YEC is like the Olympics of the youth orchestras.