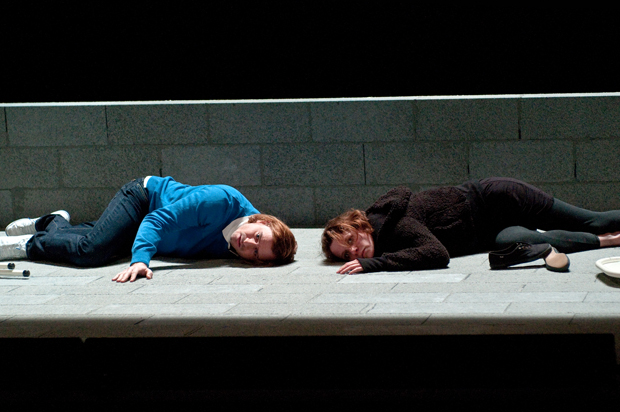 He claims to be saving them from themselves. Taking them out of their drug-laced urban lives and locking them in a basement on the outskirts of town. But how do his prisoners respond to this extreme intervention? Norwegian playwright Arne Lygre’s Days Beneath presents this spine-tingling narrative in a minimalistic, yet riveting evening of theater.

And at the helm of the German-language premiere is one of France’s most buzz-worthy directors, and artistic director of La Colline – théâtre national, Stephane Braunschweig. Known for his essential takes on classics like Wagner, Brecht and Büchner, this production marks the French director’s second appearance at the Haus der Berliner Festspiele’s Spielzeit’Europa.

Exberliner caught up with him during rehearsals in Dusseldorf to discuss contemporary theater, the internet and the Norwegians.

You’ve worked with actor Udo Samel on both Woyzceck (1999) and Norwegian playwright Henrik Ibsen’s Ghosts (2003 and 2006). What’s it like working with him for a third time?

As a director I always like to work with the same actors again because I think it allows us to go deeper and deeper. It has to do with trust, which I think is important for good work. I must say, we wanted to work together again but he had no time and I had no time and then, when I read this play, I thought immediately, “That would be a good part for him and that’s the reason I’d like to do it.”

What is Samel’s role in this production?

The Besitzer (owner) is somebody who takes people to get them out of dependence on drugs using violence. But he is doing that for their own good. He obviously wants to be good to them but he doesn’t choose the right method. He is good and evil together, a very complex character. That’s what I like about Lygre’s plays: you can’t just say the character’s crazy. You always have to readjust your point of view on the character and even during the play I think the audience has to change their mind about him many times.

Did the events of the summer in Norway, and Anders Brevik’s recent insanity plea, affect the way you see the play?

In Norway the people always think that nothing can happen there, because it’s a small country with rich towns, and then suddenly it happens. I did another Lygre play in Paris – his most recent one, I Disappear. The connection with what happened this summer is really strong, but the play was written last year. (With Lygre) you get this feeling of what our world is, and what the questions we are confronted with.

What do you see as Lygre’s place in the development of contemporary drama?

We need new plays, not only with strong plots; we need new forms of writing. I think that’s very strong in Lygre: There are a lot of violent elements in it that are never really shown on stage. I like that it has to do with violence, but that the way of performing is not violent.

There is also a kind of distance and a humor to it. It eliminates the difficulty of differentiating between the real and fantasy in his theater. This has to do with our difficulty as people to be in reality, now everything is virtual with the internet and television. The real world is difficult to recognize, and I think this theater relates to that.

How do you approach directing such a play?

We don’t play realistic and naturalistic; we try to be very essential so that it has bones. The characters move only when they need to move. I always work in a very concrete and emotional style. For the audience, it’s way to go through feelings, through emotions, and I’m happy when the emotions bring up some existential questions for the audience.

Why is going to the theater still important for 21st century society?

I think theater brings, to each person coming to see it, a very personal and individual experience, but in a common place. Everybody has this need to be a person and, at the same time, to be part of a society and to understand that each personal point of view is relative to another.

How have your first two years at the Theater La Colline gone?

In Strasbourg, it’s a big theater in a quite small city and it was easier to have a good relationship to the audience. In Paris it’s quite different because it’s a big, big city and there’s a lot on offer. La Colline is a theater dedicated to new authors and new forms. There is a quite young audience coming to us and they know they will find something, a new experience and I am glad to provide that.