Berlin theatre has plenty of cool and plenty of loud. So let’s celebrate the quiet side: Naoko Tanaka’s Shadow Trilogy. 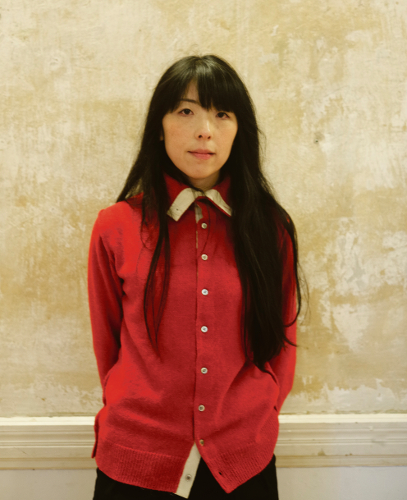 Naoko Tanaka was a visual artist – she studied painting and sculpture in Tokyo and then in Düsseldorf. What happened next isn’t a huge surprise if you know about the dance scene in Düsseldorf. Tanaka saw the tableau vivant/performance installation/dance mash-up that artist V.A. Wöfl calls “Neuer Tanz”. She joined an art collective that defied defined roles – everyone did everything. Then she moved to Berlin and started making work that is striking, moving and hard to classify.

Tanaka builds installations and then navigates them holding a light. While these object-scapes are dream-like and evocative (drawers floating askew in midair, held up by their spilling contents), this isn’t really object theatre. The real métier of Shadow Trilogy are the shadows themselves. They are cast onto the floor and projected onto scrims as Tanaka carefully directs her small light around the installations to create abstract, ever-changing shadows.

It’s pretty far from a narrative shadow play; nor is it dance, though Tanaka’s movements show a clear sense of specific choreography. Still, it makes sense that her work would have been chosen for Sophiensaele’s emerging choreographer festival, Tanztage, and remounted there this month after a few years of touring (and winning prizes) internationally. Because Tanaka is fundamentally interested in “the temporal dimension as well – how a space changes, moves, unfolds over time.” As simple, but perhaps effective, a definition of dance as you might want.

The first of the trilogy, Die Scheinwerferin, takes quite a personal starting point: Tanaka’s relation- ship to her own body. “I had an- orexia as a teenager. As a child, I thought inside my body should be darkness. You can’t see anything inside – I always wondered about that. What would it be like to bring a light inside your body? Childlike thoughts. So for this piece, I made a doll that looked just like me. As a ritual, I split from my body, and the light is like a flying eye that’s not burdened by the physical body and can move freely to a spiritual world, or a subconscious.” While the starting point is deeply subjective, the work is refreshingly non-didactive and unironic, marked instead by this childlike openness and innocence.

It’s easy to get metaphysical about shadows – you don’t have to stretch too far to get from Plato to Carl Jung. But for Tanaka, these questions don’t come from a philosophy syllabus. She expresses them with a simple sense of wonder and a pragmatic interest in how shadows look and the way they are made. “I’m interested in the fact that light is projection. Sunlight is a projection of the sun. Light radiates 360 degrees and falls on everything. What’s a shadow? When that light hits something, and we recognise it. So light and shadow are actually one thing.”

In Unverinnerlicht, the last of the three, the central image is that of a child’s chair. Tanaka rigs the chair to slowly bend at the knees, wobble, fold in on itself and then slowly open up again, like a flower beginning to bloom. Regular performance-goers in Berlin are used to plenty of everything: screaming, noise, blood, piss, snot, spit, dicks, too many floppy taxidermied dead horses. In such a landscape, focusing one’s attention on a child-sized chair that dances isn’t just refreshing, or surprisingly moving. It’s kind of radical.