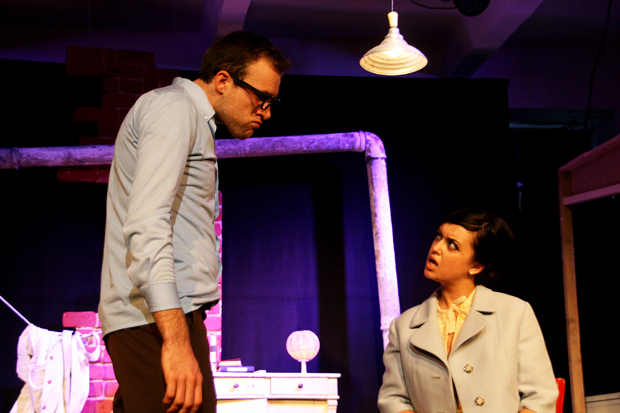 He’s a self-taught intellectual, she’s a Long Island housewife trapped in a classic loveless marriage. He has just kidnapped her, dragged her back to his seedy flat, and is now too clumsy to get any action.

Instead, he gives up his act as a hard boiled kidnapper (unsustainable for such a delicate, yet angry, man); she proves to be a worthy opponent, so the two embark on a 40-minute conversation – just long enough to cover all the major existential topics and find mutual affection.

Through all the talk of modern life’s sheep-like routines and lack of communication, Murray Schisgal’s 1963 Drama Desk Award-winner The Tiger tries to put a new spin on society’s ills. But it’s 2010 now, and by restating the last 50 years-worth of criticism, the play’s claws aren’t sharp enough to do serious damage.

The conversation onstage becomes a cliché, leaving the limelight to the play’s most interesting feature: the love story. It’s far more intriguing to witness leading-role débutante Khema de Silva (as Gloria) and Stu Alexander (as Benjamin) discover the spark between them slowly growing stronger. Although Alexander tends to drown his lines in mumbling or spew them out at a gallop, the actors convey an attraction that’s quite sweet and entertaining.

The Tiger, a New York play best watched with a drink in hand, has found a perfect setting at Play2C: housed in an old flour mill (now a yoga and dance studio by day), this tiny 20- to 30-seater with a bar is almost worth a visit just for its own sake. There aren’t many theatres where you leave your shoes at the door so as not to damage the floors….