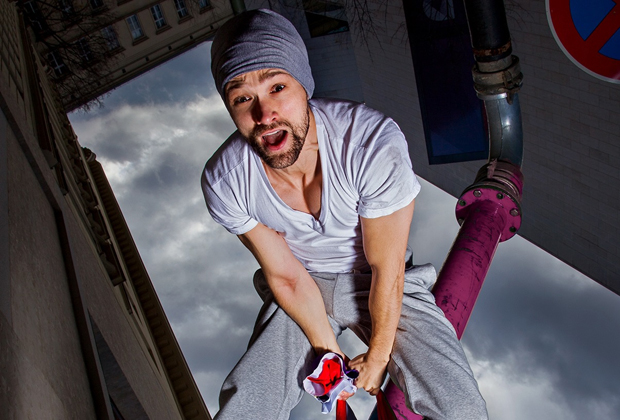 Director Yael Ronen and Ensemble’s production of Common Ground effectively addresses the concept of identity amidst the context of war and post-war life through the exploration of the stories, memories and the present troubles of those who fled Yugoslavia during the tumultuous 1990s to find refuge in Germany.

After the opening dialogue – and to the sound of Nirvana’s Smells like Teen Spirit among others – the characters take us on a whistle-stop journey through the 1990s, frantically taking turns to bark headlines at the audience.  “The Rwandan massacre of 1994”, and “Robbie Williams leaves Take That” is just one of the many cross-cultural juxtapositions which leaves the audience slightly bewildered.

Following in the footsteps of her earlier works like Third Generation, Ronen’s carefully selected cast includes former Yugoslavians whose own lives directly reflect their characters’ – Vernesa Berbo, who fled to Berlin from Sarajevo in 1992, being one good example. With this, Ronen transforms the stage into a platform whereby each actor/actress – through the conduit of their character – can express the emotions felt by people who experienced the traumas of war first-hand, and have the challenge of creating a new life in a foreign place alongside the memories and emotions which rack their minds daily. The simple set design – consisting of just wooden boxes and a few scattered props – results in a forever-changing stage which symbolises one of the play’s key themes – the adaptation to life after war.

Over time, we realise how the eight characters’ paths have crossed at some point – the children of the war’s victims and the children of war criminals are in the same room, resulting in intense scenes of guilt, blame, and catharsis in which the drama of the piece peaks and the true capabilities of the cast shine through. The often direct delivery of these heavy themes may seem overwhelming at first, but the constant flow of Ronen-style comic relief alleviates this, also helping to open up the audience emotionally. This balance between the harrowing narrative and the mundane is epitomised in one of the culminating scenes in which Serbian actor Aleksandar Radenković screams the lines “My family is being bombed’ in the same breath as “I’m a fashion victim”, as another comparison between ‘our 1990s’ and ‘his 1990s’ is made. This final scene is representative of one of the play’s most effective tools – the contrast between the horrors and injustices of the Yugoslav Wars and the trivial problems one encounters in a relatively safe life – which could be seen to symbolise the inner conflict which burdens the characters’ minds, and the coping, forgiving, and magnanimity which must come as part-and-parcel of how emotions of the past interfere in the present, post-war life.

Overall, the production blurs the boundaries between theatre and autobiographical performance, with the concept of identity being presented as the result of the synergy between the then and the now, and the inner conflicts which arise from coping with one’s past seem to be settled and resolved by the time the characters “get their identities back” and the sixth encore comes around.