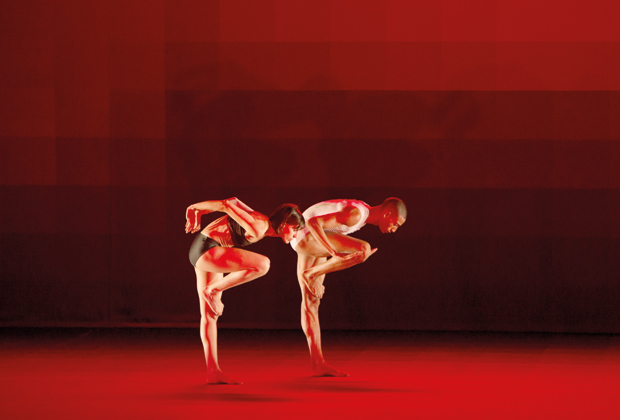 The multi-award-winning British choreographer has staged works for the Paris Opera Ballet, La Scala and the Nederlands Dans Theater as well as a dance number for the Olympic Games in London and choreography for Harry Potter’s magical creatures. With his London-based company Wayne McGregor/Random Dance, founded in 1992, he experimented with science and technology to create movement. His scientific questionings reveal what happens when atomised movement, film, sound and light collide.

How have scientific developments allowed you to further explore your ideas for dance?

What’s been interesting over the last 10 years or so has been the advancements in cognitive science and the technology by which things can become visible from the inside of the body which were once invisible. Our understanding of brain science has developed – how we start to look at what’s going on in the brain and the instruments to be able to serve this. This is why with this piece I got so interested in biometric data. How do you take intimate signals from inside your body and use them as a resource for dance making?

In Atomos you ask the question, “What is the body?” How did the use of technology contribute to that questioning?

It came out of the fact that I wanted to take a kind of iconic film from the 1980s, a film I knew very well and loved (Blade Runner), and cannibalise it. One thing we did is that we took the film and we atomised it. A software programme divided it into 1200 parts – the little atoms of the film. The computer analyses the motion in that clip and throws it out on the screen as a 3D creature. So on screen, wearing 3D glasses, you see this kind of autonomous agent that takes the maths from the movement in the image and it creates these physical kinds of tendon, bone and, kind of, strangeness. We use that for improvisation.

So your dancers wear 3D glasses and work with the creature’s movements?

Yeah, they work with this creature. The creature has parts of the film motion that it captured, in a form you don’t recognise. It’s not like a stick figure trying to do the moves, it’s a very hypnotic, very beguiling creature in its own right. The dancers wear 3D glasses and improvise with it to provide novel or unfamiliar solutions for the body.

How did you experiment with biometric data?

Studio XO, who we did the costumes with, they took my biometric data – my sense of arousal, excitement and adrenalin – and converted it into maths and made objects out of it. These Styrofoam-type objects we then improvised with to give us a kind of relationship to the object. We then took the object away and we had choreography.

Tell me a bit about the music.

What’s interesting about Blade Runner is the music by Vangelis, which was one of the first electronic scores for a movie. I asked [post-classical duo] A Winged Victory for the Sullen to kind of atomise, pixelise the Vangelis and then work with it to guide those granules of sound.

You’re well-known for your collaborations with influential artists from all fields, like Thom Yorke.

I think dance has to be plugged into the real world. So often art forms can be stifled off into side communities and I’ve never been interested in that. With someone like Thom, I’m interested in people’s physical signatures. Thom has an amazing way of dancing anyway, so it was really all him and me helping him sculpt and shape that in a choreographic form. That’s why I loved working with him.