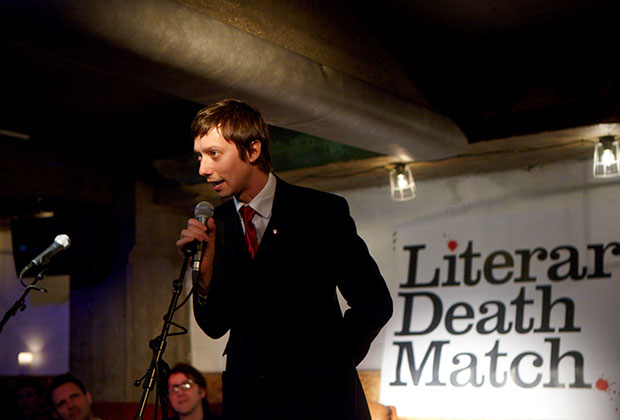 In Literary Death Match, literature clashes with comedy when four readers and three judges take the stage and promise on-stage reading and a game show-y finale that will make you doubt your senses. After six years and more than 40 cities around the world, Literary Death Match creator and host, Todd Zuniga, will present its Berlin debut on June 19.

This is a Literary Death Match; but there’s more to it than just reading. That’s only the first round…

Yeah. We split the readers into two groups, they read their own work, and after that we turn the mike over to the judges, and they judge literary merits, performance and intangibles. There’s no mean-spirit too it. We’re about niceness, and we sort of build the event around that – that and silliness. Then the finale brings everything together. At the end of the show will be a game, everybody’s going to be screaming, I’ll be in a three-piece suit, and you’ll be like “why’s he in a three-piece suit?” – but that’s part of it. Oh, and the winner wins a Literary Death Match Berlin Episode 1 medal along with literary immortality.

Where do you find these fearless contenders and judges for the LDM?

It’s really important to find readers that are diverse so we don’t have four fiction writers who are sort of quieter. In Berlin we have Julian Gough, an Irish writer who did LDM in Dublin and he’s just out of this world! There’s Risto Oikarinen, a Finnish poet that came highly recommended. Then we got Clare Wigfall – someone had seen on twitter that we were coming to Berlin, and they were just ‘she’s a great performer!’ She won a BBC National Short Story Award in 2008. And Lady Gaby was the last one we confirmed. She’s sort of a wild woman.

In terms of the judges, I just ask people who they think are fun or smart. A weird thing though, I don’t know if we have any Germans in this line-up, which just made me sad and depressed… Hopefully I’ll find a solution. It seems a little bit insulting not to. But my goal was to have seven people of different nationalities, because Berlin is the centre of culture in the world.

Even though we have crazy literary events in Berlin like Dichter und Dichter vs. Borderlines, people still tend to think reader events are an (uncool) nerd thing.

That’s the thing, I really think that everybody in the world wants to be literary, that they care about literature, but they don’t have as much time… it’s hard to find time to read, and when you do, it’s hard to read something great. This serves as a taste test, wrapped and packaged in silliness and fun. You know, Ralph Waldo Emerson said “Nothing great was ever achieved without enthusiasm,” and that is such a huge part of the show. The other huge part of the show is from what Oscar Wilde said: “Anyone who lives within their means suffers from a lack of imagination.”  So we got imagination and enthusiasm in spades. That’s part of the fun – the show is really accessible.

How do you make it accessible to audiences who might not be big readers?

I like that you think F. Scott Fitzgerald-jokes are accessible…

Well, accessible in terms of you’ve heard of him. When I tell you F. Scott Fitzgerald was a foot fetishist – I’ll just drop that for no one reason, and so there’s the accessibility, this weird titbit about someone that everybody knows. George Saunders, the other guy that I just mentioned, said ‘humour is telling the truth faster than people expect it’, so I try to say things so fast that people don’t know what’s coming, and then by the time they’re realising that they shouldn’t care, we’ve moved on to other things, and then they just feel like it mattered. That is the most convoluted statement on earth! But I’ll stick to it. Yeah.

You say you can never expect what’s going to happen at a show, but what can we expect here in Berlin?

You’ll ride on a cloud of whimsy and edutainment – it’s like education and entertainment – through an hour and 45 minute show slash intermission in which you’ll meet three of your future best friends slash drinking partners, and you won’t check your cell phone once except to tweet that you’re there, and you’re jaw will slowly just dangle from your jaw, because you’ll be going ‘what the F is happening?’ and you’ll be smiling the whole time. It’s an amazing thing that’s going to happen. I can guarantee you’ll leave surprised and in a good mood.