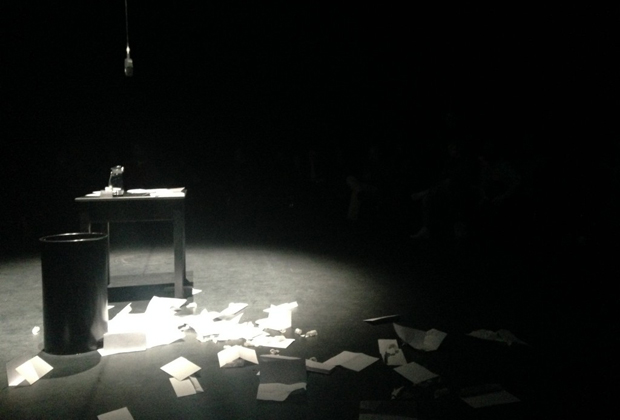 A conversation about “The State”: For her first official dispatch from Theatertreffen, Rebecca teams up with her fellow (German) blogger, Annegret Märten, for an exchange on the audience behaviour of the participatory play.

There’s a black table with a square pit in the middle. It contains a stack of envelopes. A stark spotlight lights the table, and a microphone dangles from the ceiling. We’re seeing The State by Bulgarian playwright Alexander Manuiloff. Well, we’re not exactly seeing it. We’re participating in it.

We’re expecting it to start but it won’t. A few minutes go by. Silence stretches. The audience, sitting in the round, wait and look at each other expectantly. It just won’t start. Finally, a man in a bright red sweater stands, approaches the table, picks up an envelope, opens the letter and reads it aloud. “The performance will start in 8 hours and 5 minutes,” he says.

I’ve never wanted the audience to mess with a performance so much as with this one. The State, invited to the Theatertreffen Stückemarkt – a showcase of new works by young European writers – is a participatory piece without actors or instructions. The piece attempts to tell the story of a Bulgarian man named Plamen Goranov who died from self-immolation. It also questions conventional theatre viewing habits within the theatre space by drawing parallels between audience behaviour and methods of participation within a democratic political system.

It took a few minutes for the first person to gather the courage and walk centre stage to take action. When were you first compelled to participate? Did you feel like you had to?

I was tempted to leap up from the get-go and open one of the envelopes. But I also knew that’s what was expected of us (I’d read the first page of the script), so in the name of theatrical purity or something similarly bogus, I decided to leave it to someone else. If I were to stretch this, maybe that’s the equivalent of assuming someone else will speak out against wrongdoing – the bystander effect.

In our room, where things were in English, about six minutes passed before the first audience member approached the table to open an envelope. (The German-language room took only two-and-a-half minutes, we learned later.) I hopped up after another five or so minutes, after I grew tired of observing the curious practice of tossing the envelope into the wastebin and leaving the paper on the table.

By this point, though, it had already become clear what awaited us in the letters. Half described how the performance would be starting later – in 6 hours, in 8 hours and 5 minutes, in two hours and 45 minutes – or could not happen because we didn’t have a director, or because the lead actor was missing, or because the show didn’t comply with shady government regulations, or whatever. The other half were first-person missives from Plamen. Some were banal. Others detailed his plans for self-immolation. (Though Plamen was a real guy, the letters are Manuiloff’s creation.)

The first envelope I opened was one of these messages from Plamen. Plamen, I learned, was well-liked. He went shopping for his 90-year-old neighbor. He liked to take walks along the river.

I found the content of the notes less interesting than what was actually happening in the room – how people were working to create structure or to rebel against it. It was quickly clear that Plamen was protesting political corruption, and that the endless “postponements” of our “performance” were also repression. That struck me as a (too?) blunt context for addressing questions of agency and participation and authority.

But the papers have to say something, right? Were you drawn to the text? Or what moments did you find engaging or surprising?

I agree that in light of the experimental structure, the content of the notes became secondary. I think it’s highly problematic that Plamen’s story got lost (sacrificed) amid examining and making a statement about negotiating collective debate in artificial spaces. This would have been different had the main character been fictional, but he was a real person who died in horrible circumstances while protesting mafia-like structures in Bulgaria.

It’s not the first time at this Theatertreffen that real people’s fates were ancillary to making a point about the structure of theatre. Die Schutzbefohlenen, too, spent an awfully long time addressing the limitations of theatre and the connections between theatre and society, which detracted from a straightforward account about – and from – the refugees. The crucial difference, however, is that I don’t think Manuiloff intended to drown out Plamen’s story, while director Nicolas Stemann’s version of Elfriede’s Jelinek text drowned out the refugees’ stories very deliberately.

To be fair, it’s not the author’s task to educate us about a topic. I’ll be the first to recoil from didacticism. Hell, I could have looked up Plamen’s biography on Wikipedia right there and then during the performance – who would have stopped me? From our audience, probably no one – considering a woman walked out with a stack of unopened letters and no one held her back.

The moments that were immediately perceived as disobedience against unspoken rules were the most intriguing: someone upending the dustbin with discarded envelopes, someone refusing to read out a letter they had taken from the pile, someone setting fire to a letter – a symbolic action if there ever was one – and being promptly asked by a member of staff to put it out (someone else extinguished it, and left their water bottle on the table).