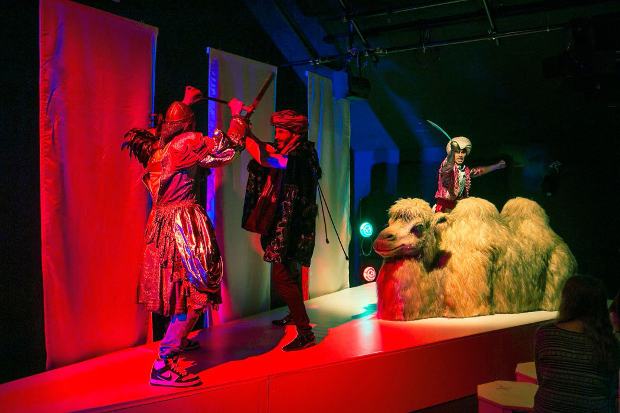 The other day I was at a workshop and needed to fill out a registration form. Name, address. Migrationshintergrund? I stopped for awhile to think about it. Of course, I have a migratory background: I moved here two years ago from California. But Migrationshintergrund also becomes, in the so-called secular and post-racial logic of 2016 Germany, a code word that lumps refugees arriving in Hauptbahnhof with Turkish-Germans born Neukölln. The concept is a kind of nexus, I suppose, for a handful of forms of non-German-ness: no EU passport, non-German-speaking, non-white, non-Christian. Some of these describe me. Others don’t.

“Do you need help with the form?” asks the woman with the clipboard. Do I explain that I am from a place where the census form has a minimum of five racial and two ethnicity categories? Can I pencil in that I am from a “free, democratic, multi-religious, multi-ethnic-militaristic-imperialistic-superpower state”: the description of the US from Theatertreffen’s opening play And the Ship Sails On? I grit my teeth and mutter proudly, “Ich schaffe es.”

At the end of Morgenland, presented by the Bürgerbühne of the Staatschauspiel Dresden, as part of TT’s Arrival Cities focus, the ensemble pick up their phones and tell someone far away, in Arabic, about their new life in Germany. Complaints about the weather are interrupted by assurances that everything is going fine – even when it seems that it isn’t. It was funny and fresh and shockingly familiar. Moments like this make me think that maybe migration rather than race or ethnicity or religion might actually be a useful category for thinking about social life in Germany rather than a euphemism for more knotty questions of race, religion, language and power.

Morgenland feels like a warm hug. The actors and musicians, who tell their personal stories throughout the evening, sum it up with a round of one sentence bios at the end of the performance: they are hairdressers and psychologists and students. None are professional actors. Some are 20. Some have lived in Dresden for decades and have raised children there. Telling a range of stories – which is to say, providing a format for a variety of Arabic-speaking immigrants to Germany to tell their stories – does seem like a way to break up monolithic notions of what it means to have a migratory background. Or what it means to be from the “Orient” (Morgenland) at all: the show opens with a riot of cliches, from belly-dancing to a giant stuffed camel.

The wider the stage, the greater the imperative

The songs, stories and poems that form the backbone of the piece are interrupted by visits from the actors, who come to share tea with each table of audience members. During one of these visits, Yesmine Trigui explained that she always asks her religious mother questions about Islam, who goes to great lengths to defend her religion and to emphasize the ambiguity of the language of the Koran.

In another, Egyptian writer Diaa Soliman read one of his short stories aloud in Arabic while we followed along in German. There was a short alphabet lesson in which we learned to write habibi and jamel (camel). I did feel like I learned something. It did feel like open and intimate conversation might be a way to move forward through Europe’s identity crisis toward a more pluralistic society.

This desire to work one-to-one might explain some of the tedious metadrama so often foisted upon actors-of-color telling refugee stories. It seems that the more major the stage, the greater the imperative that actors justify their path there. But how much of Gotta Depri’s story from And the Ship Sails On, for example, is bullshit: from cotton fields to a German NGO to Theatertreffen, lucky, lucky, lucky. Is this what the audience wants to hear?

Thematically, both the festival-opener and Morgenland are about immigration and the future of Europe. But the big, wide main stage and the intimate Camp space could not be more different. When Gotta Depri climbed from the stage and into the audience, I wondered (perhaps cruelly) if this was the first time some of the people in the first ten rows, the ones with the white hair and expensive seats, had ever touched a black person. “Does it matter?” asks my Ausländer husband. I think it might.

Read more at the Theatertreffen Blog.